The Government of the Central African Republic (CAR) and the United Nations humanitarian country team today launched the nearly $400 million response plan for the 2017-2019 period to meet the basic needs of 2.2 million Central Africans.

According to a press release from the UN Office for the Coordination of Humanitarian Affairs (OCHA), the response plan, with a budget of $399.5 million, covers three strategic objectives: save more lives; strengthen the protection of affected populations; and preserve human dignity by restoring access to basic social services and livelihoods.

The security situation has deteriorated markedly, particularly in the second half of 2016, with a growing number of hot spots. This degradation has generated new humanitarian emergencies and exacerbated the vulnerability of more than 70,000 newly displaced people.

“New crises arise elsewhere in the world and attract the attention of donors because of their acuity and their dreadful effects on civilian populations,” he said.

Against this background, Virginie Baikoua, the Minister for Social Affairs and National Reconciliation of CAR and Mr. Yao called on donors to increase their engagement with the country in order to consolidate the achievements made during previous years and respond to new emergencies.

A strong advocacy campaign is also under way to ensure that CAR is not a forgotten or neglected crisis. 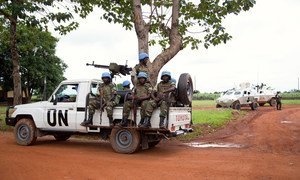 The Security Council has strongly condemned the ambush by unknown attackers late last week against a convoy of the United Nations Multidimensional Integrated Stabilization Mission in the Central African Republic (MINUSCA) in Bokayai, in the northwest part of the country, in which one Bangladeshi peacekeeper was killed.