MINUSTAH/Marco Dormino
A man walks through rubble of collapsed buildings in downtown Port au Prince, Haiti, which was rocked by a massive earthquake, on Tuesday 12 January 2010, devastating the city and leaving thousands dead.
12 January 2017

Marking the seventh anniversary of the tragic earthquake in Haiti, a United Nations special adviser today paid tribute to the victims of the catastrophe which claimed the lives of 200,000 Haitians, as well as 102 UN personnel.

“This loss is also a reminder of the risks that we face, deployed around the world, in the service of peace, security and stability,” said Dr. David Nabarro, Special Adviser to the Secretary-General, in a note issued by the UN spokesperson.

“As an official of the UN, I am heartened that seven years after this tragedy, Haiti has found its path to political stability with the election of a new president and parliament, and I stand with the people of Haiti, and all of our colleagues around the world, in honouring the memory of those we lost but whom are never forgotten,” he said.

“We continue to stand together to ensure a better, safer, and healthier year for the people of Haiti in 2017 and beyond,” he added.

Also today, The United Nations in Haiti paid tribute to the memory of all Haitians, women, men and children, as well as United Nations colleagues, national, international and volunteer personnel who lost their lives in the deadly 2010 quake.

During a ceremony held at the UN offices in Port-au-Prince, Sandra Honoré, the Special Representative of the Secretary-General and head of the UN Mission in the country known by its French acronym, MINUSTAH, renewed her condolences to the families of the victims and expressed sympathy for all those whose lives continue to be affected by this tragedy.

“We cannot forget this tragic event, the brutality of which has marked us all. We cannot forget those who have left us, and that is why we gather today to remember, each one of us, the joys they have given us and the sorrows we have shared; of their love for Haiti,” she said.

On this ‘National Day of Reflection and Awareness on the Vulnerability of Haiti to Risks and Disasters,’ Ms. Honoré also emphasized the courage of the survivors whose “determination and dedication have enabled Haiti to rise and move forward.”

While honouring the efforts to strengthen the policy of prevention and management of risks and disasters, as well as the modification and implementation of construction standards in the country, Ms. Honoré also paid tribute to the victims of Hurricane Matthew, which ripped through the tiny nation on 4 October 2016.

VIDEO: In the aftermath of the devastating earthquake of 2010, millions of Haitian lives were shattered, particularly those of young people. UNDEF is supporting projects around Haiti to boost the potential of the country’s youth, who have lost hope and a sense of purpose in the years following the tragic event. 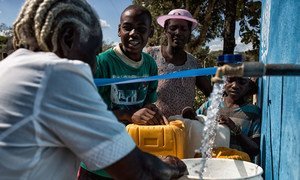 The top United Nations humanitarian official in Haiti recently inaugurated the third phase of a project that will provide clean water to the community of Los Palis in the district of Hinche, located in the centre of the Caribbean island nation – part of the world body’s efforts to help the country deal with cholera epidemic there.