More must be done to assist, protect freezing refugees and migrants in Europe – UN agency

The United Nations refugee agency is urging European authorities to step up support and security for refugees migrants facing harsh winter conditions, particularly amid reports that people have frozen trying to enter or move across Europe.

“Saving lives must be a priority and we urge States authorities across Europe to do more to assist and protect refugees and migrants,” said Cécile Pouilly, the spokesperson for the Office of the UN High Commissioner for Refugees (UNHCR), at today's Palais des Nations press briefing in Geneva.

The UN agency and partners have scaled up their own efforts in Greece, Serbia and other countries in the region. In Greece, for example, workers transferred hundreds of people to better accommodations, and passed out close to 360,000 high thermal blankets, winter boots and other warm items.

Grave concerns remain, however, for families living on the Greek island of Samos, where newcomers have been in limbo for months.

Speaking about the situation there, Ms. Pouilly said that UNHCR is “deeply worried at the situation of some 1,000 people, including families with young children, who continue to live under unheated tents and dormitories.”

She reiterated the UN agency's call to further accelerate procedures on Samos and other islands which would allow faster transfers to the mainland, where better accommodation is available.

The freezing temperatures has killed a number of refugees and migrants, reportedly including two Iraqi men and a Somali woman in southeastern Belgrade, and an Afghan man at the Greece-Turkey border.

The spokesperson reiterated UNHCR's call “to increase safe pathways for the admission of people in need of protection,” including through options such as resettlement and family reunification so as to cut the reliance on human smugglers.

AUDIO: Concern is growing for asylum-seekers facing freezing conditions in the Balkans amid reports that they are still facing police violence and expulsion from European Union Member States.

UN agency issues recommendations on integration of refugees in Europe 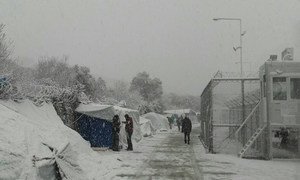 Sounding the alarm over the situation of thousands of migrants, asylum seekers and others enduring extreme cold conditions across Europe and Eastern Mediterranean, the United Nations migration agency has appealed for immediate action to save them from freezing to death.