The top United Nations human rights official today called on business leaders gathering at the World Economic Forum's annual meeting in the Swiss town of Davos next week to use their considerable influence to stand up for human rights and prevent rights violations in countries where they operate.

“The hard-won laws and principles of the Universal Declaration for Human Rights are increasingly imperiled, and the business leaders gathering in Davos next week have a key role to play to stem this terrible tide and to insist upon respect for human rights in the States where they operate,” said UN High Commissioner for Human Rights Zeid Ra'ad Al Hussein in a news release issued by his Office (OHCHR).

The UN rights office launched in December 2016 a global campaign called “Stand Up for Someone's Rights Today.” The campaign is an effort to galvanize everyone – private sector, governments, individuals, civil society – to play an active role in standing up to defend the human rights of all, at a time when these hard-won rights and freedoms are facing increasing pressures across the world.

Responsible business relies on stability – sound institutions, the smooth functioning of justice, sustainable development and public confidence in their personal safety, Mr. Zeid said, stressing that human rights lie at the core of such long-term stability.

He also underscored the need for companies to take a clear, unequivocal stance that they will not tolerate links to human rights abuses anywhere in their operations and supply chains – and to have systems in place to ensure such abuses are actively prevented and promptly addressed. For instance, some banks have withdrawn funding for projects where human rights violations have occurred.

“Many companies have already begun taking steps to prevent and mitigate human rights abuses in their operations in line with the UN Guiding Principles on Business and Human Rights, including by setting up ways for people to safely lodge complaints,” Mr. Zeid said.

Zeid commended the steps taken by some leading companies to take a stand against media outlets peddling hate speech and xenophobic content and called on others to show similar leadership and to join in the fight for the global values that are currently under threat. 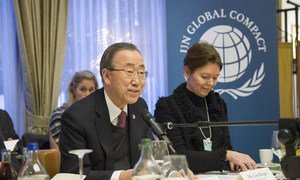 Speaking at the Global Economic Forum in Davos, Switzerland, United Nations Secretary-General Ban Ki-moon today called on the world’s business community to play its full role in helping to achieve the ambitious 2030 Agenda for Sustainable Development, which seeks to eliminate poverty, hunger and a raft of social ills, all within 15 years.