OCHA/Amy Martin
Women displaced from the Jebel Marra area in Darfur standing next to their temporary shelter in Tawilla, North Darfur.
12 January 2017

“Civilians remain exposed to significant sources of insecurity such as inter-communal conflict and criminality, including the activities of armed militias,” the Under-Secretary-General for Peacekeeping Operations, Hervé Ladsous, told the Council presenting the latest report of the Secretary-General on the situation in Darfur.

He added that despite a significant decrease in overall armed conflict, particularly as a result of the Government's military successes against armed movements, the situation in the region is further exacerbated by a “widespread proliferation of weapons and the inadequacy of rule of law and justice institutions.”

Tensions between the various communities recur due to long-standing disputes over access to land and the control of water and other resources, according to information cited from the report.

For example, at least 70 people were killed in the past few months in clashes between farmers and herders in seasonal migration underway in the southern part of Darfur.

Such violence is raising concerns for the millions of displaced people living in bases and camps under the protection of the African Union-UN Hybrid Operation in Darfur (UNAMID).

“Long-term comprehensive solutions remain necessary to create the necessary conditions for the return or resettlement of the 2.6 million people who remain in displacement in the region,” Mr. Ladsous said, “and the resolution of the underlying causes of inter-communal conflict related to access to land, water and other natural resources.”

Among other points raised in his briefing, Mr. Ladsous noted that despite efforts by UNAMID and the African Union High-level Implementation Panel (AUHIP) and international initiatives, “little tangible progress” has been made in the peace efforts in Darfur. At issue are delays over agreement on the cessation of hostilities and humanitarian assistance. 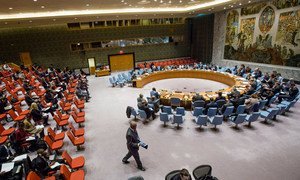 Citing more than 20 years of collaboration between the United Nations and the Organisation of Islamic Cooperation (OIC), a senior UN political official today urged greater efforts by the two entities to draw on each other’s strengths and devise joint strategies to prevent and resolve conflicts.