UNHCR/Ivor Prickett
Families flee their homes in Mosul, Iraq, heading for an army outpost in the Samah neighbourhood where they will be taken away from the heavy fighting engulfing the city.
11 January 2017

The United Nations Humanitarian Coordinator in Iraq, Lise Grande, reported today on the conditions in Mosul, a city witnessing one of the largest urban military operations since the Second World War, warning that a proper humanitarian response, conditions that created the Islamic State of Iraq and the Levant (ISIL/Da’esh) could remain.

When the military operation to oust terrorists from the area began on 17 October 2016, 1.5 million civilians were living in Mosul. In the eastern part of the city, some 400,000 are now free of control by the ISIL.

However, the western part of the city, an area that is much more densely populated and home to 750,000, remains under ISIL control. Military operations to retake that part of the city are expected to begin in late February or early March.

“One of the exceptional aspects of the Mosul military operation was the decision by the Iraqi security forces to adopt a humanitarian concept of operations when they were developing their battle plans,” said Ms. Grande.

The plan, she explained, prohibits artillery strikes, requires civilians to remain in their homes, and provides humanitarian exit corridors wherever necessary. Civilians in Mosul are at an extremely high risk – they represent 47 per cent of all casualties in the military operation so far.

“You would expect in a conflict like this that the number of civilian casualties would be around 15 per cent, a high of 20 per cent. What we’re seeing in Mosul is that nearly 50 per cent of all casualties are in fact civilians,” Ms. Grande said. 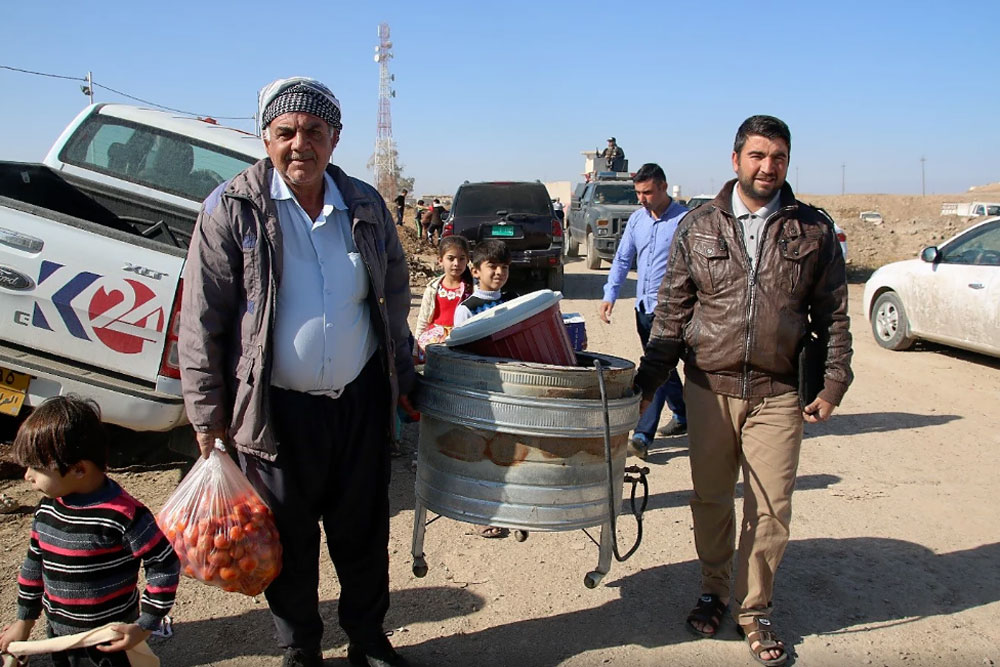 New arrivals at Khazer camp, a safe haven for over 6,000 Iraqis who have fled the fighting in Mosul, just 45 kilometres away. Photo: WFP/Alexandra Murdoch

Meanwhile, the humanitarian community is worried that a siege is a very real possibility. The Special Representative emphasized that a siege of 750,000 people would have enormous implications and that 90 per cent of efforts to break a siege fail. Given the statistics, stakeholders are working as hard as possible to deliver supplies.

Planning for the “massive” humanitarian response that began last February has enabled workers to reach 500,000 people. There are currently nine open camps, with an additional nine underway. The Special Representative underlined that the Iraqi Government had been instrumental in providing large amounts of assistance to its people.

Since ISIL’s rise in Iraq, 4.5 million people have fled their homes. Depending on how the military operations in Mosul progress, another one million could end up displaced. And the return process, Ms. Grande noted, is quite difficult.

“When Da’esh is defeated in Iraq, that’s a military success, but the humanitarian crisis is a legacy – it just keeps going,” she said.

“As soon as Da’esh is defeated, there are a lot of people who need to get back home, to get back to their lives. If they don’t, the conditions which led to the rise of ISIL will continue to be there. Humanitarians know that when Da’esh is defeated that the world’s attention is going to go elsewhere and that it will be difficult for us to mobilize the resources necessary.”

Ms. Grande then turned to the Mosul dam, another looming risk that has the potential to impact some 20 million people. The dam, she explained, has a strong potential for a catastrophic outburst and would be disastrous for both its capacity for damage as well as the unpredictability with which it would happen.

“Anyone who says a catastrophic outburst would be ‘Biblical’ – they are correct,” asserted the Humanitarian Coordinator, who is a trained hydrologist with a specialization in the particular dam that is in Mosul.

In response to danger, UN agencies have created an early warning system with the Iraqi Government and the UN Office for Coordination of Humanitarian Affairs (OCHA) is developing an international response to assist the Government in the event of the dam’s collapse.

Nearly 700 people have been moved to hospitals from the frontlines in Mosul, Iraq, as the United Nations and partners are working to scale up humanitarian efforts for thousands of people fleeing the fighting between the Islamic State of Iraq and the Levant (ISIL/Da'esh) and Iraqi forces.