UNICEF/Muhannad Al- Asadi
On 4 January 2017, UNICEF started trucking water to 50 schools in the capital Damascus and surrounding areas. Fighting in and around Wadi Barada, on the outskirts of Damascus, has resulted in damages to the water network.
11 January 2017

The United Nations expressed concern today about fighting in the Wadi Barada area of west Damascus, which in addition to displacing thousands of people, has also restricted water supplies to some 5.5 million people in and around the Syrian capital.

Addressing reporters in New York, UN Spokesperson Stéphane Dujarric said the Organization and its partners are working with water authorities “to implement an emergency plan to meet around 30 per cent of the daily needs of people.”

Speaking earlier this month, Jan Egeland, the UN Senior Adviser on Syria, noted that “to sabotage and deny water” could constitute a war crime.

“The UN and our national and international humanitarian partners continue efforts to scale up our response in Aleppo to do all we can to ensure that the people of Aleppo receive the aid they need,” Mr. Dujarric said.

AUDIO: Concerns are growing that the recent pause in fighting in Syria may give way to renewed hostilities as ongoing water shortages continue to affect millions of people in Damascus. Credit: UN News 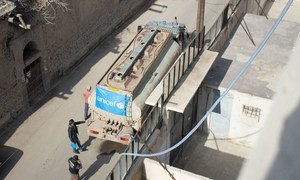 Lack of water access in Damascus is creating risks for children, UN warns

Following two weeks with no access to running water for millions of people in and around Damascus due to ongoing fighting near the Syrian capital, the United Nations Children’s Fund (UNICEF) today raised the alarm over a potential increase in diarrheal diseases among children.