Sounding the alarm over the situation of thousands of migrants, asylum seekers and others enduring extreme cold conditions across Europe and Eastern Mediterranean, the United Nations migration agency has appealed for immediate action to save them from freezing to death.

According to the International Organization for Migration (IOM), at least six individuals – three migrants in Bulgaria, one in Greece and two refugees in Lebanon – have succumbed to the harsh winter that has struck the region with some of the heaviest snowfall and the most severe icy temperatures in years.

Deaths due to exposure have also been reported in the Italian capital Rome and of those in transit across the Balkans.

“It is imperative that the world respond to the dangers exposed by these extreme weather conditions with food aid, shelter and other resources in the short term and long term,” William Lacy Swing, the IOM Director General, said yesterday, recalling the carnage in the Mediterranean Sea in 2016.

Last year, the deadliest year ever for migrants recorded by IOM in the region, at least 5,000 migrants lost their lives as they tried to cross the Mediterranean Sea with hopes of reaching European shores.

This extreme weather at the start of 2017 has brought particular fear for the lives and well-being of 15,500 migrants and asylum seekers, housed in camps on Greek Islands, including many in places that have been hit hard with snowfall. Families with children are most at risk.

Additionally, some 6,000 Syrian refugees in Turkey are reported to be without adequate, winterized shelter – out of a total refugee population of about three million.

IOM also reported that more than 7,500 people are currently stranded in Serbia, living in accommodation without adequate winter protection. Also, in makeshift refugee settlements in Lebanon, some 100 incidents of tents collapsing were reported. 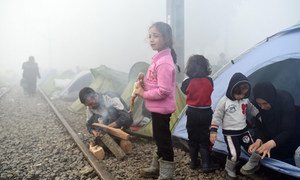 As temperatures drop, asylum-seekers on Greek islands need to be moved to mainland – UN agency

Drawing attention to situation of hundreds of asylum-seekers on the Greek Aegean islands, facing further vulnerability as temperatures are expected to drop in the coming days, the United Nations refugee agency underlined the urgent need to accelerate their transfer to the mainland.