UNICEF/Roger Lemoyne
In Belize, two-year-old Abner laughs while being carried by his father, James Choc.
10 January 2017

Today marks the launch of a new United Nations Children’s Fund (UNICEF) campaign, #EarlyMomentsMatter, aimed at raising awareness about the critical impact that early experiences have on children’s brain development during their first 1,000 days of life.

Before the age of three, human brain cells make up to 1,000 new connections every second, a speed that slows later in life. These connections ensure that children’s brains continue to grow and lay the foundation for future learning, health and happiness. These brain connections cannot reach their full potential without nurturing care, including adequate nutrition, stimulation, love, and protection from stress and violence.

A recent series by The Lancet found that some 250 million children in developing countries are at a risk of poor development due to stunting and poverty. However, greater investments in early childhood development are needed in all countries: according to UNICEF, children living in middle and high-income countries are also facing risks. The agency estimates that millions of children spend their critical early years in unstimulating and unsafe environments, thus jeopardizing their cognitive, social, and emotional development.

UNICEF’s campaign, supported by the LEGO Foundation, will begin with a digital and print initiative to help parents and caregivers better understand the neuroscience behind brain development for babies. It uses the hashtag #EatPlayLove to raise awareness about science in a straightforward, visually compelling way and to encourage societies to prioritize a strong start for children.

UNICEF recalled that early childhood investment is one of the most effective ways to ensure that people reach their full potential well into adulthood and that such investments are especially critical for those who live in poverty. According to one study conducted over a 20-year period, disadvantaged children who participated in quality early development programmes as toddlers later went on to make up to 25 per cent more as adults than their peers who did not receive the same support.

Through the campaign, UNICEF is calling on governments to step up their investments in early childhood, expand health and social services to young children, and to strengthen support services for parents and caregivers. The campaign is also receiving support from the H&M Foundation, the Conrad N. Hilton Foundation, ALEX AND ANI, and the IKEA Foundation. 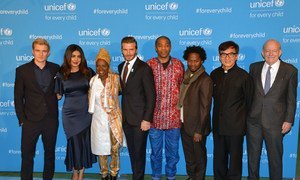 Celebrities and advocates came together last night to honour UNICEF’s 70 years of advocacy for children around the world at an event in New York that included conversations with Goodwill Ambassadors and musical performances.