Lack of water access in Damascus is creating risks for children, UN warns

UNICEF/Muhannad Al- Asadi
On 4 January 2017, UNICEF started trucking water to 50 schools in the Syrian capital Damascus and surrounding areas. Since 22 December 2016, water has been cut for at least 4 million people as a result of fighting in the Wadi Barada area.
6 January 2017

Following two weeks with no access to running water for millions of people in and around Damascus due to ongoing fighting near the Syrian capital, the United Nations Children’s Fund (UNICEF) today raised the alarm over a potential increase in diarrheal diseases among children.

While private distributors are providing water, Christophe Boulierac, a spokesperson for UNICEF, told reporters at the regular bi-weekly press briefing in Geneva that he is worried about quality and price of those supplies.

Residents have been able to access water for up to two hours every three or four days through water rationing. But many have turned to private distributors, where neither price nor quality are regulated, prompting concerns about the risk of water-borne diseases among children. In many areas, families are paying up to $12 for only 1,000 litres of water.

UNICEF also reported that children are taking on the burden of water collection for their families and that most children had walked at least half an hour to collect water from the nearest mosque or public water point. They waited in line for up to two hours in freezing temperatures.

So far, UNICEF and its partners have rehabilitated and equipped 120 wells in and around Damascus in order to provide a third of residents’ daily water needs. As of 22 December, those wells were the only source of water for the entire city. Following the cuts, UNICEF also provided generators and fuel in order to increase water production for 3.5 million people. This past week, daily water trucking resumed for 50 schools in Damascus to reach up to 30,000 children. 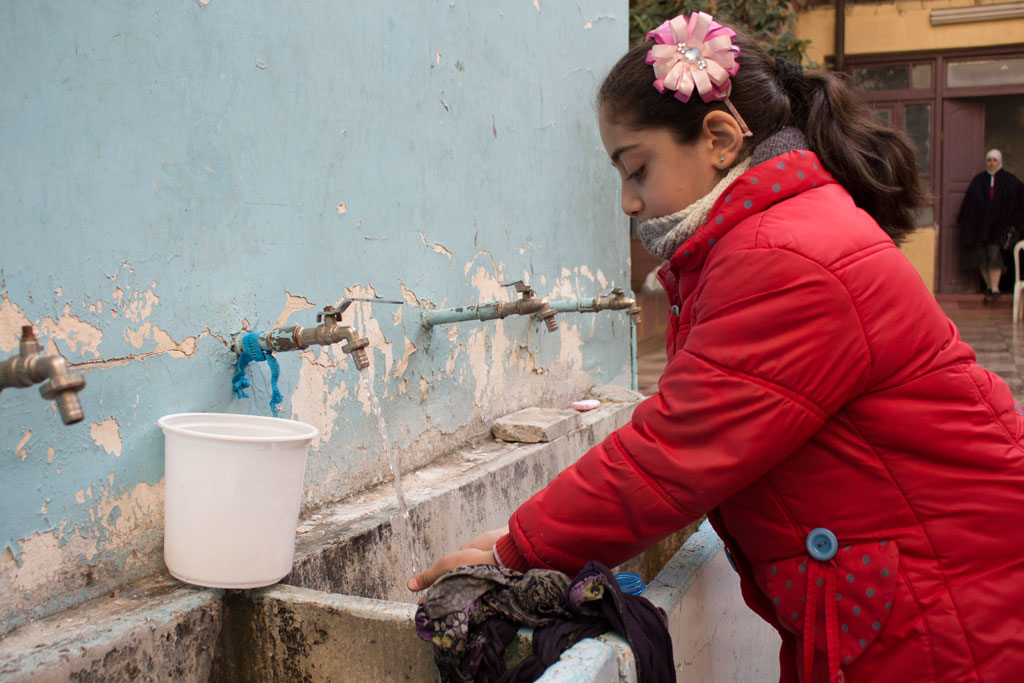 On 4 January 2017, children at Ibn Hazm School in Syria's capital Damascus have water for the first time in almost two weeks, after UNICEF started emergency trucking to 50 schools in the area. Photo: UNICEF/Muhannad Al- Asadi

However, these solutions are only temporary and UNICEF and its partners are ready to support repair work to damaged sources and networks as soon as access is granted. The agency emphasized that all parties to the conflict must meet their obligations under international humanitarian law and protect all civilian infrastructure, including water facilities.

Mr. Boulierac reported that the area’s two primary water sources – in Wadi Barada – are natural springs and have been affected by fighting, but he was unable to immediately provide further details about access or the process to arrange deliveries.

A spokesperson for the World Health Organization (WHO), Tarik Jasarevic, added that once teams had access to public water utilities, it would take a minimum of four days to complete repairs, possibly longer depending on the nature of the damage. He also noted that some people are using water sources near the river within Damascus, and that that water has yet to be tested for bacterial safety. 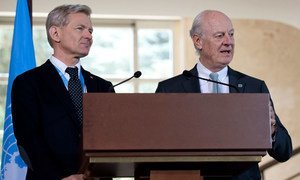 After five years of ‘ruthless war’ in Syria, 2017 can be a year of diplomacy, says UN envoy

Looking back over the past month, which saw some of the most difficult challenges for humanitarian workers in Syria but which also witnessed evacuations of thousands of civilians from war-ravaged eastern Aleppo, United Nations envoys for Syria said today that things have to change in 2017 and that “it can change in 2017.”