After five years of ‘ruthless war’ in Syria, 2017 can be a year of diplomacy, says UN envoy

Looking back over the past month, which saw some of the most difficult challenges for humanitarian workers in Syria but which also witnessed evacuations of thousands of civilians from war-ravaged eastern Aleppo, United Nations envoys for Syria said today that things have to change in 2017 and that “it can change in 2017.”

“After five ruthless war years, we can have a year of diplomacy, of conflict resolution, and of protection of civilians, it can happen, and we were heartened to hear that Russia and Turkey both said [that] they will facilitate humanitarian access to all civilians as part of the Cessation of Hostilities Agreement that they function as guarantors for,” Jan Egeland, a senior UN advisor on Syria, told the media at a briefing at the UN Office at Geneva.

“And we will actively hold them accountable for their promise to help us,” he added.

The situation in Syria continues to remain particularly dire, in 2016, on average, relief workers were able to reach only about 21 per cent of the needs in the war-torn country, which while being an improvement of the one per cent figure in 2015, still meant that 79 per cent of those in need could not be provided with assistance.

‘Enormous dramas are unfolding’ on the ground – Jan Egeland

On the current situation in the ground, Mr. Egeland reported that “enormous dramas are unfolding as we speak.”

One such place is Damascus, the capital of Syria.

According to the senior UN humanitarian official, about 5.5 million people in the city have been cut off from water because the springs of Wadi Barada – located just outside Damascus – that accounts for 70 per cent of the water supplies, have been broken. The reason for the supply disruption is yet to be established.

The UN has sought permission to visit Wadi Barada to look into the disruption and to explore how the supplies can be restored.

It is, meanwhile, undertaking emergency efforts to ensure that schools, hospitals, bakeries and other essential services can get water.

Also speaking at the same briefing, Staffan de Mistura, the UN Special Envoy for Syria, expressed cautious optimism, particularly in light of a recent resolution adopted by the Security Council in which the 15-member body welcomed and supported Russian and Turkish efforts to end violence and jumpstart a political process in Syria.

“Any initiative such as this one, needs to be supported, and we hope it will succeed and is definitely welcomed,” said Mr. de Mistura adding that the UN would support the process, as requested by Member States.

Speaking specifically on planned political talks in Kazakhstan’s capital, Astana, he added: “[We are] looking forward to [the meeting], particularly in the context of our own meeting that will be taking place early in February here.” 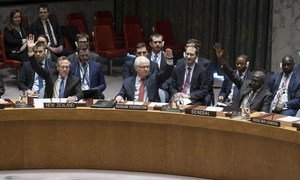 The United Nations Security Council today unanimously adopted a resolution welcoming and supporting the efforts by Russia and Turkey to end violence in Syria and jumpstart a political process for the war-torn Middle Eastern country.