A team of United Nations human rights experts is supporting a recent decision by a United States school district in Connecticut to remove offensive and inaccurate historical information about slavery from its classrooms.

The information was part of a textbook, The Connecticut Adventure, and stated that slaves in the state of Connecticut were often treated like family members, “taught to be Christian,” and sometimes to read and write. It was taught to students aged nine to 10 until district officials removed it because its depiction of slavery was inaccurate, simplistic, and offensive.

“The chapter discussing the history of slavery in Connecticut is a distortion of the true nature of enslavement,” announced Ricardo Sunga, a human rights expert who is the leader of an expert panel set up by the UN Human Rights Council to study racial discrimination around the world.

“Enslaved people in Connecticut, like those in the American South before the Civil War, were trafficked against their will, had their fundamental right to life, liberty, and property taken away from them, faced similar levels of exploitation, and were subjected to the most dehumanizing treatment imaginable,” said Mr. Sunga.

He added that students need to know that enslaved people were never treated as “family.”

Following the decision by the Norwalk, Connecticut school district, the UN Working Group of Experts on People of African Descent has urged that other districts throughout the US – and other countries around the world – follow the example of promoting historical accuracy.

The Working Group is also urging the US Department of Education and other school districts in the US and other countries to review textbooks and educational materials in order to determine whether they accurately depict slavery. Where appropriate, they urge officials to remove inaccurate or distorted information from classrooms.

“These deeply offensive texts should be replaced with accurate depictions of history which convey the message of the inherent dignity and equality of all human beings,” Mr. Sunga emphasized.

“Educators and publishers have a responsibility to ensure that textbooks and other educational materials accurately reflect historical facts on tragedies and atrocities – in particular, slavery, the transatlantic trade in African people, and colonialism.

“This will avoid stereotypes and the distortion or falsification of these historical facts, which may lead to racism, racial discrimination, xenophobia, Afrophobia, and related intolerance,” he added.

Independent experts are appointed by the UN Human Rights Council. They work on a voluntary basis; they are not UN staff and do not receive a salary for their work and are independent from any government or organization, and serve in their individual capacity. 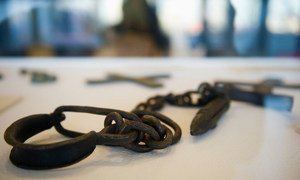 'All of humanity is part of this story,' UNESCO says on Day to remember slavery and its abolition

The courage of the men and women who in August 1791 revolted against slavery in Haiti “has created obligations for us,” the head of the United Nations Educational, Scientific and Cultural Organization (UNESCO) said on the day set aside for remembrance of that rebellion, noting that “all of humanity is part of this story” and efforts to teach the history of the slave trade will help build a better world.