The United Nations today reiterated its call for “immediate and long-term support” for more than 100,000 people in the Syrian city of Aleppo, warning donors that it will not be able to provide life-saving assistance without it.

In the first press briefing of the new year, the UN spokesperson in New York voiced continued concern for 116,000 people who have registered with its agencies and partners as “displaced” from formerly non-Government controlled neighbourhoods of eastern Aleppo.

“The scale of destruction in Aleppo is massive and needs enormous help,” the spokesperson said, citing a lack of water and sanitation, electricity and housing, among the immediate concerns.

The UN and its partners are working closely with the Government to respond to these and other most urgent needs.

Also today, the UN called for help with water shortages in Damascus, where at least four million people in the city and surrounding area have been deprived of water since just before 25 December.

The UN has rehabilitated and equipped a number of wells in and around the city, which since 22 December have been the sole source of water for the entire city, according to the UN Office for the Coordination of Humanitarian Affairs (OCHA).

Meanwhile, water authorities had activated emergency places to meet the minimum demands in Damascus city, OCHA said from the UN office in Geneva, with water being delivered on a rotational basis.

Some five and a half million people in Syria’s capital Damascus, have been deprived of water for the past seventeen days. Credit: UN News 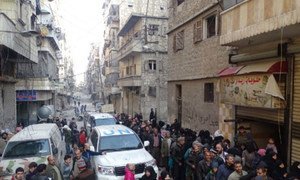 A “very large, dangerous, difficult and complex evacuation” entered its final phase today –mainly from eastern Aleppo and from the two villages Foah and Kefraya – a senior United Nations humanitarian envoy announced, adding that it is “now a race against the clock and the winter to provide safety for the desperate people that have been trapped in the besieged city.