A United Nations human rights expert on freedom of religion or belief has welcomed the United States' legislative amendments aimed at protecting non-believers and atheists.

“This is an important development, as believers, atheists and non-believers must all be equally protected,” said the newly appointed Special Rapporteur on freedom of religion or belief, Ahmed Shaheed, in a news release from the Office of the UN High Commissioner for Human Rights (OHCHR).

“Many humanists and non-believers are still widely stigmatized and persecuted around the world.”

US President Barack Obama signed the amendments to the International Religious Freedom Act on Friday.

According to the news release, the promotion of atheist thought in any form is considered an act of terrorism in some countries. In others, any expression of non-belief or atheism is condemned as blasphemy or apostasy and receives harsh punishment, including the death sentence or attacks by vigilante groups.

“People often do not fully understand the scope of the international human right to religious freedom. It is not just about religions or beliefs, but it also covers the right to freedom of thought and conscience as provided by the Universal Declaration for Human Rights,” noted the Special Rapporteur.

The expert said the terms “religion” and “belief” should be understood in a broad sense to include theistic, non-theistic and atheistic beliefs, as well as the right not to profess any religion or belief.

“All of them have important roles to play in building pluralistic and inclusive societies for the 21st century that are peaceful and prosperous,” Mr. Shaheed stressed.

“In the face of increasing diversity, the freedom of religion or belief can be upheld only with the acceptance and full inclusion of atheists and non-believers,” he concluded. 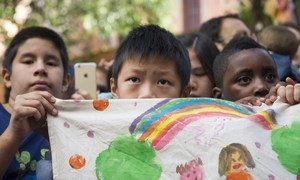 Underscoring the importance of tolerance, particularly in today's diverse world, United Nations Secretary-General Ban Ki-moon and the head of the UN Educational, Scientific and Cultural Organization have called for seeing the world through the prism of “we the peoples” and to collectively build societies that are more inclusive, more peaceful and more prosperous.