UNICEF/Wathiq Khuzaie
A young girl looks through a hole in the wall from damage from conflict in a school in Ramadi, Anbar Governorate, Iraq.
27 December 2016

As part of an urban recovery project in Iraq, the United Nations Human Settlements Programme (UN-Habitat) has renovated 123 damaged residential housing units in newly liberated areas so that their rightful owners can live in safety and with dignity.

The Tameem neighbourhood of Ramadi Anbar Governorate was one of the areas largely damaged by the Islamic State of Iraq and the Levant (ISIL/Da'esh), and devastated after major military operations began in December 2015 to retake the areas from the terrorists.

Upon the request of the Anbar Governorate, and with a generous contribution from the Government of Japan, the first phase of UN-Habitat’s “Promoting Urban Recovery in Newly Liberated Areas in Iraq” project in the Tameem neighbourhood has been completed.

“UN-Habitat’s intervention is community-based as the local community committees had played a substantial role in coordinating and facilitating the technical assessment and the participation of more than 96 persons from the neighbourhood in the rehabilitation works in the first phase,” said Erfan Ali, Head of the UN-Habitat Iraq programme, in a press release.

Dr. Ali recalled that two months ago the UN-Habitat had rehabilitated female student housing in the University of Anbar in Ramadi. He said that the agency would continue to rehabilitate 104 accommodations in the Tameem neighbourhood in the next phase and another 200 houses in early 2017, which is currently under technical assessment.

The Governor of Anbar, Sohaib Al-Rawi, emphasized the importance of housing rehabilitation, calling it “critical to enable the return of the displaced citizens to Ramadi and in other cities.”

He reiterated his appreciation to UN-Habitat for implementing the housing community intervention as well as to all the international agencies supporting stabilization and recovery in the areas retaken from ISIL. 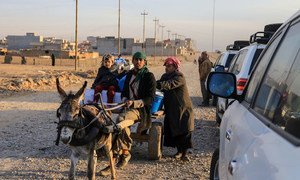 The United Nations Children’s Fund (UNICEF) has received a new pledge of 7 million euros from the European Union to support the UN agency’s work in Iraq, where an estimated 11 million are in need of humanitarian assistance – half of them children.