UN Photo/Manuel Elías
The Security Council votes on resolution reiterating its demand that Israel immediately and completely cease all settlement activities in the occupied Palestinian territory, including East Jerusalem. The vote was 14 in favour, with one abstention (United States).
23 December 2016

United Nations Secretary-General Ban Ki-moon today welcomed the adoption of a Security Council resolution which states that the establishment of Israeli settlements in Palestinian territory occupied since 1967, have “no legal validity,” constitute a “flagrant violation” under international law and are a “major obstacle” to a two-State solution and a just, lasting and comprehensive peace.

“The resolution is a significant step, demonstrating the Council’s much needed leadership and the international community’s collective efforts to reconfirm that the vision of two States is still achievable,” the UN chief’s spokesperson said in a statement.

“The Secretary-General takes this opportunity to encourage Israeli and Palestinian leaders to work with the international community to create a conducive environment for a return to meaningful negotiations,” the spokesperson added. “The United Nations stands ready to support all concerned parties in achieving this goal.”

Earlier this afternoon, the 15-member Council adopted the resolution by a vote of 14 in favour and with one abstention – the United States abstained from the vote. The resolution had been put forward by Malaysia, New Zealand, Senegal and Venezuela.

In the resolution, the Council reiterated its demand that Israel “immediately and completely cease all settlement activities in the occupied Palestinian territory, including East Jerusalem, and that it fully respect all of its legal obligations in this regard.” 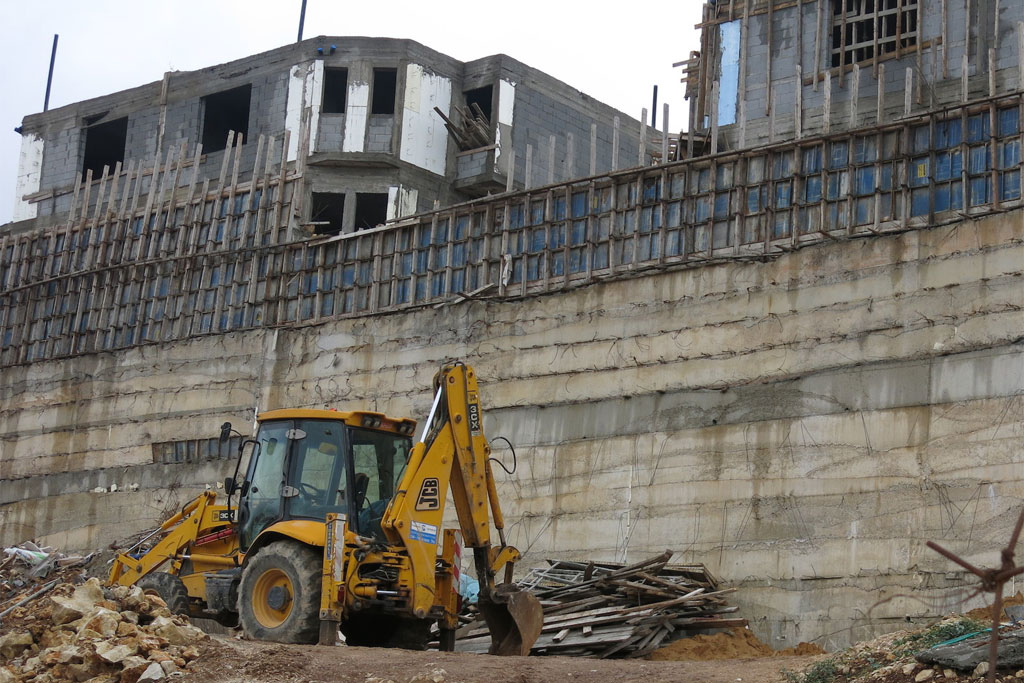 Construction workers in the West Bank settlement of Ariel. Such Israeli settlements have expanded in recent years. Photo: Annie Slemrod/IRIN

The Council also underlined that it will not recognize any changes to the 4 June 1967 lines, including with regard to Jerusalem, other than those agreed by the parties through negotiations.

The resolution called for immediate steps to prevent all acts of violence against civilians, including acts of terror, as well as all acts of provocation and destruction, and for accountability in that regard, as well as for both parties to act on the basis of international law, including international humanitarian law, and previous agreements and obligations, “to observe calm and restraint, and to refrain from provocative actions, incitement and inflammatory rhetoric.”

It further called for compliance with obligations under international law for the strengthening of ongoing efforts to combat terrorism, including through existing security coordination, and to clearly condemn all acts of terrorism.

The Council also urged for intensification and acceleration of international and regional diplomatic efforts and support aimed at achieving, without delay a comprehensive, just and lasting peace in the Middle East on the basis of the relevant United Nations resolutions, the Madrid terms of reference, including the principle of land for peace, the Arab Peace Initiative and the Quartet Roadmap and an end to the Israeli occupation that began in 1967.

Israelis and Palestinians must ‘rebuild trust in each other,’ Ban tells Security Council

While the international community must spare no effort revive waning support for the long-sought two-state solution for Middle East peace, Secretary-General Ban Ki-moon told the United Nations Security Council today that “ultimately, it is up to the Israelis and the Palestinians to make peace,” and called on the two sides to “rebuild trust in each other.”