UN Photo/Mark Garten
María Emma Mejía Vélez, Permanent Representative of Colombia to the UN, at the opening of the exhibition “HERstory: A Celebration of Leading Women in the United Nations.”

“Through today’s exhibition, the Group has managed to capture both the impact of women at the highest levels of the UN and an historic push for gender equality in employment and decision-making that goes far beyond these halls,” said Peter Thomson, President of the UN General Assembly, during the exhibition’s launch ceremony.

The exhibition: HERstory: A Celebration of Leading Women in the United Nations highlights a host of women’s “firsts” at the UN – such as the first woman to be appointed Deputy Secretary-General, Louise Frechette and the first woman to be appointed Special Representative of the Secretary-General (SRSG) for a peacekeeping operation, Margaret Anstee.

Here, we take a photo journey back in time to witness just a few of the critical roles women have taken on since the UN was but a fledgling institution.

“Where the rules are silent women are not usually considered” – Jessie Street, Australia’s only female delegate to the United Nations Founding conference, 1945.

Bertha Lutz (Brazil), Minerva Bernardino (Dominican Republic) and Virginia Gildersleeve (US) were among the four women to sign the UN Charter in San Francisco on 26 June 1945.

Jessie Street (Australia) canvassed for language in the Charter that would make all UN positions equally open to women and men (article 8). Marie-Hélène Lefaucheux (France) – pictured above on the left – was behind the proposals for both the Declaration on the Participation of Women and the Open Letter to the Women of the World.

“The United Nations shall place no restriction on the eligibility of men and women to participate in any capacity and under conditions of equality in its principal and subsidiary organs.” – Charter of the United Nations, Article 8.

Since the 1950s, women have held prominent roles in the Organization.

In 1951, Anna Figueroa Gajardo (Chile) was the first chairwoman of a major UN Committee. Two years later, Vijaya Lakshmi Pandit (India) was the first woman to be elected President of the General Assembly and in 1958, Agda Rössel (Sweden) was the first female permanent representative to Sweden.

“I’ll ask you, of all the rights you have, which do you think are too many for women? What is too much?” – Bodil Begtrup, first chairwoman of the United Nations Commission on the Status of Women, 1946.

Eleanor Roosevelt (United States) was the First Chair of the Human Rights Commission, 1949. At Minerva Bernardino’s insistence, Article II of the Universal Declaration of Human Rights uses language explicitly in defence of the rights of women.

Voters in Mozambique flash their registration cards outside a polling station in a Maputo suburb. UN Photo/Pernaca Sudhakaran

“Women had been a ‘missing link’ in development, now they were being found; they could actually be a valuable resource, indeed were half, or more, of a nation’s human resources, no longer to be wasted.” – Lucille Mathurin Mair, Secretary-General of the World Conference on the United Nations Decade for women, 1980.

Mr. Guterres emphasised that 'a surge in diplomacy' was necessary to achieve peace. UN Photo/Rick Bajorna

Margaret “Peg” Snyder (United States) was the Founding Director of the UN Development Fund for Women, known since 1978 as UNIFEM.

“Being a female… I have 100 per cent of the population, not only 50 per cent… it is important to have a holistic approach to any type of conflict and it is very important that the UN took the step to appoint a female force commander.” – Kristin Lund, on being appointed the first female Force Commander, 2014.

Full use should be made of the Organization's convening power, as a forum for dialogue, to ease tensions and facilitate peaceful solutions. UNHCR/Francesca Salvi

According to Mr. Guterres, strategies for peacekeeping, peacebuilding and women, peace and security must converge. UN Photo/Logan Abassi

Simonetta Di Pippo, who leads the UN Office for Outer Space Affairs Office in implementing its unique mandate to promote international cooperation in the peaceful uses of outer space, spoke to UN News.

The Group of Friends for Gender Parity are a partnership between the UN missions of Colombia, Germany, Qatar and United Arab Emirates. 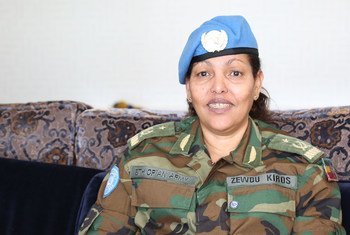 16 years ago today, the United Nations Security Council adopted resolution (S/RES/1325) on women, peace and security, which has since come to be famously associated with the number 1325 within the UN system.