UNICEF/Tanya Bindra
In Lagos, Nigeria, residents navigate the polluted waters of Makoko, a fishing community mostly made up of structures on stilts above Lagos Lagoon, as smog spreads throughout the canals.
22 December 2016

A United Nations human rights expert today called on the Nigerian Government to increase funding for water and sanitation in next year’s budget to address the needs of 21 million residents of Lagos, the country’s largest city, which continues to grow while access to basic services dwindles.

Léo Heller, Special Rapporteur on the human rights to water and sanitation, commented on the budget, shortly after it was presented by the State Governor to the Lagos House of Assembly, stating that the Government reports show high deficits in the sector, “representing clearly unacceptable conditions for millions of the megacity’s residents.”

According to Mr. Heller, the annual budget discussion is a chance for the city to take action in providing water and sanitation to the people. He also expressed concerns over the high numbers of vulnerable people. “There is no question that the city’s water and sanitation sector has deteriorated to this point because of the way it has been managed for many years.”

The Special Rapporteur also presented a few alternative solutions to the problem for the Government to consider, such as increasing the effectiveness of the public service provider, adopting necessary financing schemes, and reducing water losses.

“For more than a decade, the Government has adopted a hard-line policy according to which the solution would seem to only attract private capital, notably via public-private partnerships (PPPs). Numerous civil society groups have urged the Government to guarantee their right to participate in these processes,” said Mr. Heller, adding that the key to an adequate solution is a participatory process.

In addition, the situation continues to worsen as the population of Lagos increases, and the resources become scarce, with an estimated 10 per cent of the population having access to water supplied by the State utility.

Residents have also been reported drilling their own boreholes, in hopes to get some water, causing various environmental and health issues, particularly contaminated water consumption.

The Special Rapporteur has reached out to the Nigerian Government earlier this year, and is still waiting for it to provide an update on the water and sanitation issue. 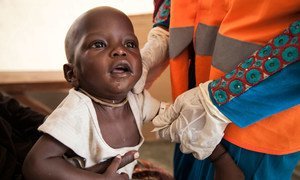 With about two-thirds of health facilities in parts of Nigeria’s restive north-east region either completely destroyed or partially damaged, United Nations Children’s Fund (UNICEF) has estimated that 400,000 children there could suffer from severe acute malnutrition over the next year.