UNHCR/Ivor Prickett
Families flee their homes in Mosul, Iraq, heading for an army outpost in the Samah neighbourhood where they will be taken away from the heavy fighting engulfing the city.
22 December 2016

“People waiting for aid are already vulnerable and need help. They should be protected, not attacked,” said Lise Grande, the Humanitarian Coordinator for Iraq.

According to the Office for the Coordination of Humanitarian Affairs (OCHA), the killings and injuries occurred on two separate occasions as a result of indiscriminate mortar fire.

“Our deepest condolences go to the families of the victims and our brave colleagues and we call on authorities to ensure the perpetrators are brought to justice and account,” she said.

The fighting between Iraqi forces and Islamic State of Iraq and the Levant (ISIL/Da'esh) in and around the city of Mosul has displaced more than 107,000 people. OCHA estimates that in a worst case scenario, as many as one million people may be forced to flee the city.

So far, the majority of families who have been displaced are staying in emergency sites and with host communities. Humanitarian agencies continue to provide life-saving assistance to those areas that remain accessible, including neighbourhoods in the eastern part of the city. To date, more than 356,000 people who have been affected by the military campaign have received aid. 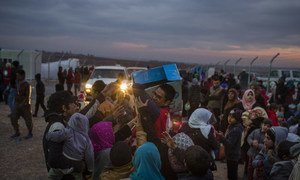 With the number of people displaced from Mosul approaching 100,000 since the military operation to oust terrorists from the Iraqi city began three months ago, the United Nations refugee agency is bolstering its capacity to host and support civilians fleeing the fighting.