OCHA/MB
UN teams have been present at the Ramouseh Government checkpoint in Aleppo, Syria, to observe and monitor the evacuations from east Aleppo since 15 December 2016 and are still maintaining a presence. 21 December 2016.
21 December 2016

Meanwhile in New York, the UN Security Council approved the delivery of humanitarian aid across borders and conflict lines in Syria for another year, adopting a resolution demanding that all parties, in particular the Syrian authorities, immediately comply with their obligations under international law.

Unanimously adopting a news resolution, the 15-member Council decided to renew, until 10 January 2018, the decisions contained in paragraphs two and three of its resolution 2165 (2014), authorizing UN humanitarian agencies and their partners to cross conflict lines and establish a mechanism to monitor the loading of all humanitarian relief consignments.

Providing an update of the situation on the ground, Farhan Haq, Deputy Spokesman for the Secretary-General told reporters at the daily Headquarters briefing that along with the Syrian Arab Red Crescent and ICRC evacuations, at least 20 surge staff from Damascus had been deployed to Aleppo to support ongoing observations of evacuations and response activities in the city.

UN teams have maintained a presence at the Ramouseh Government checkpoint in Aleppo to observe the evacuations from east Aleppo since 15 December, he said, adding that the ICRC estimates that more than 25,000 people have been evacuated from the besieged neighbourhoods in eastern Aleppo over the past five days.

Mr. Haq said that according to the World Health Organization (WHO), as of 19 December, 301 wounded and sick people had been evacuated, including 93 patients in critical condition who have been transferred to Turkey; others were transferred to hospitals in Idlib and in rural western Aleppo.

“Protection of civilians leaving these areas remains the biggest concern. The process for evacuation was traumatic, with crowding and vulnerable people waiting for hours and exposed to sub-zero temperatures,” he said, adding that all remaining civilians must be allowed to safely leave should they choose to do so.

Access to people in need to provide them with life-saving humanitarian assistance is also urgently needed, added Mr. Haq. 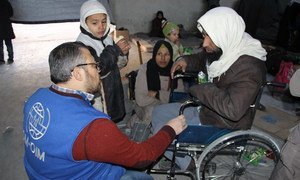 As evacuations resume in Aleppo, UN prepares to redeploy staff to monitor process

As the Syrian Arab Red Crescent and the International Committee of the Red Cross (ICRC) resumed this morning evacuations from besieged neighbourhoods in eastern Aleppo, the United Nations reported that it has received authorization to send 20 international and national staff to the city to play a critical role in the monitoring and the response.