While the world has achieved significant progress in human development over the past two decades, United Nations Secretary-General Ban Ki-moon pointed out today that “prosperity has not been shared by all,” as he lauded the virtues of confronting the void with solidarity.

“The global poverty rate fell by more than half. People are living longer and healthier lives, and are better educated,” Mr. Ban said in his message commemorating International Human Solidarity Day. “Despite these and other advances,” he continued “inequalities, extreme poverty, unemployment, social exclusion and environmental degradation continue to be prominent features of societies around the world.”

The UN chief noted that discrimination and prejudice remain major barriers to building inclusive societies, and that many vulnerable social groups find their situation worsening. Additionally, he added that the impacts of climate change would fall most heavily on those who did least to cause the problem.

“Solidarity is essential to address these gaps in sustainable development,” Mr. Ban underscored.

He recalled that ‘leaving no one behind,’ promoting prosperity and ensuring inclusiveness and equality are core principles of the 2030 Agenda for Sustainable Development, adopted by world leaders in September 2015, and of the Paris Agreement on climate change adopted in December of that same year. “As nations strive to uphold their promises and to meet the 17 Sustainable Development Goals (SDGs), mutual support will be crucial. Global problems require collective solutions,” he emphasized.

At a time of divisiveness on many key global issues, from armed conflict to forced migration, Mr. Ban said that people “need to turn toward each other in common cause, not away from each other in fear.”

“On International Human Solidarity Day, let us emphasize the role of human solidarity in building lives of dignity for all on a healthy planet. We must work together to achieve the SDGs and secure the future we want,” concluded the Secretary-General. 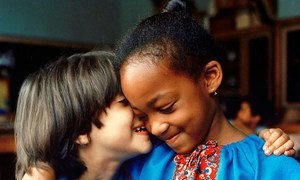 On International Human Solidarity Day, United Nations Secretary-General Ban Ki-moon pointed to the newly-adopted 2030 Agenda for Sustainable Development and called for joint action to implement its targets and create a better future for all.