The United Nations human rights chief today said he is “deeply alarmed” at a planned Government shutdown of social media in the Democratic Republic of the Congo (DRC) from Sunday evening, ahead of the end of President Joseph Kabila's mandate, coupled with a continuing ban on demonstrations by civil society and the opposition.

“We are especially concerned as Monday also marks three months since 54 people died in Kinshasa, when defence and security forces used excessive force against people calling for constitutional deadlines to be respected and for President Kabila to step down at the end of his second and final mandate, UN High Commissioner for Human Rights Zeid Ra'ad Al Hussein said, adding that to date, no one has been held accountable for this violent repression of demonstrations.

Since the beginning of December, the UN Joint Human Rights Office in the DRC documented at least 45 arrests of people trying to exercise their right to peaceful assembly. Of these, at least 16 people were detained in Bunia, Kinshasa, the capital, and Goma in the context of the 'Bye Bye Kabila' campaign organized by the Filimbi and Lucha youth movements. A further 26 people were reportedly arrested for their political links or because they belong to citizen movements.

“Intimidating and targeting opponents and civil society is not the answer. Silencing their views and stopping them from protesting is not the solution, and in fact is more likely to push them to resort to violence,” said Mr. Zeid, calling on the Government, and especially its security forces, to take all necessary measures to guarantee the rights to freedom of association and of peaceful assembly.

He went on to express concern that the DRC Government has asked Internet providers and phone operators to block social media networks from Sunday evening. “Such disruption is generally disproportionate and risks heightening tensions and fears, as it follows recent increased restrictions on independent media and on political debate,” he stressed, adding: “I urge the authorities to reverse this order and to guarantee the right to freedom of expression and to access information, in line with the Congolese constitution.”

Under an agreement reached with some members of the opposition, elections are not expected before April 2018, with Mr. Kabila planning to stay on in office beyond 19 December. Talks mediated by the Catholic Church have been taking place in Kinshasa to try to find a negotiated way forward beyond this date and to avoid violence. Respect for the Constitution and human rights principles and standards must be a cornerstone of any agreement achieved at these talks, the High Commissioner noted.

“Let me stress how important the implementation of confidence-building measures is to reassure the Congolese population. I call on the Government to release all political prisoners, guarantee the independence of State institutions, including the judiciary, and open up the political space. At the same time, the opposition and civil society must strictly adhere to the peaceful exercise of their rights and freedoms,” Mr. Zeid said. 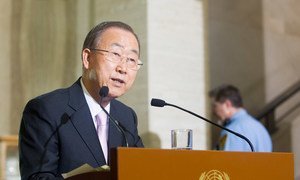 Welcoming the announcement of the continuation of the mediation led by the Conférence épiscopale des églises du Congo to achieve a more inclusive consensus on the upcoming elections in the Democratic Republic of the Congo, United Nations Secretary-General Ban Ki-moon called on all political actors in the country to recommit themselves to this dialogue.