The United Nations Special Rapporteur on summary executions urged the Government of the Philippines to lift a series of preconditions it has imposed on her planned visit to investigate the alleged extra-judicial killings of suspected drug dealers, since President Rodrigo Duterte took office.

According to a news release from the Office of the UN High Commissioner for Human Rights (OHCHR), estimates by the authorities themselves suggest that close to 6,000 people have been killed since the beginning of President Duterte’s anti-drug campaign. Of these, 2,086 were allegedly killed in police operations and 3,841 in other circumstance, including vigilante-style killings.

“I deeply regret the Government’s position and urge the authorities to reconsider their demands,” said Ms. Callamard, adding that she proposed an alternative, which comply with the Human Rights Council’s code of conduct governing country visits by Special Rapporteurs.”

Ms. Callamard’s visit was aimed at investigating the rising death toll in the context of President Duterte’s ‘war on drugs.’ Despite media reports, the Government claims it did not cancel the visit, insisting, however, that the Special Rapporteur will have to comply with the conditions imposed by the president in order to visit the country.

“It is crucial for the effective implementation of the mission that the UN terms of reference are fully accepted by governments and that the code of conduct is respected,” stressed Ms. Callamard, adding that these are essential guarantees which ensure that the mission delivers on its outcomes, to the benefit of all those involved. 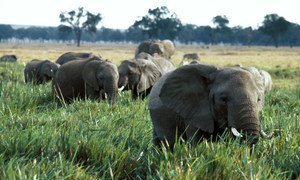 A new report by INTERPOL and the United Nations Environment Programme (UNEP) links environmental crimes with other serious illegal activity, including corruption, counterfeiting, drug trafficking, cybercrime, and financial crimes as well as with terrorist organizations and non-State armed groups.