UN/MINUSTAH/Logan Abassi
As part of joint efforts between the UN and the Government of Haiti to fight cholera, water filter systems are distributed in Cité Soleil, Port au Prince.
16 December 2016

Recognizing the moral responsibility of the United Nations to the victims of the cholera epidemic in Haiti, the General Assembly today welcomed the new UN approach to tackling the disease – formally launched earlier this month by Secretary-General Ban Ki-moon – and called on all 193 of the world body’s Members States to provide the two-track plan their full support.

Adopting a consensus resolution, the Assembly called upon “all Member States, relevant UN bodies and other international governmental and non-governmental partners to provide their full support to [the new UN approach], in particular to intensify their efforts to respond to and eliminate cholera and to address the suffering of its victims, including by providing material assistance and support to communities and those Haitians most directly affected by cholera,”

Costing an estimated $400 million over the next two years, the approach, detailed in a report of the Secretary-General entitled A new approach to cholera in Haiti, will centre on two different elements, known as ‘Track One’ and ‘Track Two.’

‘Track One’ consists of a greatly intensified and better-resourced effort to respond to and reduce the incidence of cholera, through addressing Haiti’s short- and longer-term issues of water, sanitation and health systems and improved access to care and treatment.

The United Nations General Assembly today adopted, by acclamation, a resolution on the new approach to cholera in Haiti. Outlined by Secretary-General Ban Ki-moon, the new approach intensifies the efforts to respond to and eliminate cholera, and to address the suffering of its victims.

Briefing the Assembly on the new approach in early December, Mr. Ban apologized to the people of Haiti, expressing deep regret for the loss of life and suffering caused by the country’s cholera epidemic, and said: “The United Nations and its Member States have the power to recognize and respond to that suffering […] let us step up in solidarity to our moral duty and do the right thing for the Haitian people and our United Nations.” 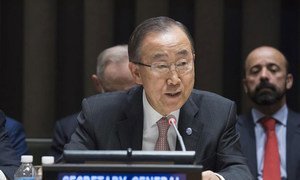