UNHCR/Ivor Prickett
Hundreds of people arrived at the Khazer 2 camp for displaced Iraqis after fleeing fighting in eastern districts of Mosul, December 2016.
16 December 2016

With the number of people displaced from Mosul approaching 100,000 since the military operation to oust terrorists from the Iraqi city began three months ago, the United Nations refugee agency is bolstering its capacity to host and support civilians fleeing the fighting.

“We have been stepping up winter distributions, providing thermal blankets and quilts to 11,200 people around Mosul, and we plan to step up distributions in coming days to reach an additional 5,000 families,” Adrian Edwards, spokesperson for the UN High Commissioner for Refugees, told reporters in Geneva.

According to the Office of the UN High Commissioner for Refugees (UNHCR), 96,864 people have so far been displaced since October 17, when a military campaign began in order to oust terrorists from the city.

The bulk of new arrivals – 57,000 people – are currently being sheltered in UNHCR-supported camps in the area. UNHCR has six camps receiving people from Mosul, with another three under construction. The nine sites would have a capacity for 102,000 people.

Significant numbers have also been fleeing Hawija in Kirkuk ahead of an offensive. In Kirkuk, additional camps are hosting people mainly displaced from Hawija.

UNHCR’s Mosul emergency response fund, set at $196.2 million, is 57 per cent funded. The largest funding gap is for the winter programme and the agency is urging donors to help close the shortfall to prepare for possible additional displacement and help offset the miserable living conditions.

In response to questions, Mr. Edwards confirmed that the figure he had quoted, 96,864 people, was the number of people that UNHCR had registered as displaced. 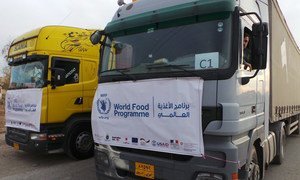