UNICEF/Charles Lomodong
On 26 October 2016, children associated with the Cobra faction wait to be demobilized in Pibor, South Sudan. A total of 145 children from the Cobra Faction and SPLA-IO were disarmed and released by the two armed groups.

15 December 2016
According to new figures released by the United Nations Children’s Fund (UNICEF), some 1,300 children were recruited by armed forces and armed groups in 2016, bringing the total number of children used in conflict since 2013 to more than 17,000.

“Since the first day of this conflict, children have been the ones most devastatingly affected by the violations,” said Leila Gharagozloo-Pakkala, UNICEF’s Regional Director for Eastern and Southern Africa.

“Now, as the fighting intensifies – and despite repeated pledges by all to end child recruitment – children are once again being targeted,” she added.

The Sudan People’s Liberation Army (SPLA) and SPLA in Opposition have both signed agreements with the UN in order to end and prevent the recruitment and use of children in the conflict.

Nonetheless, UNICEF reports that violations against children have continued to occur since 2013, including 2,342 who have been killed or maimed, 3,090 who have been abducted, and 1,130 sexually assaulted. There have also been 303 attacks or military use of schools and hospitals.

In addition to the ongoing armed conflict, South Sudan is suffering an economic crisis that has brought inflation to more than 800 per cent, leading to widespread food insecurity and childhood malnutrition at emergency levels throughout most of the country.

UNICEF and its partners have treated 184,000 children with severe cases of malnutrition this year – an increase of 50 per cent from last year and more than 135 per cent higher from 2014.

“UNICEF’s concern is that with the prospect of increased hostilities and atrocities, the suffering that children have endured will have no end,” said Ms. Gharagozloo-Pakkala. “The children of South Sudan must no longer live under constant fear of hunger or conflict. They need sustained peace, care and support.”

The UN Mission in South Sudan, known as UNMISS, has been operating in the country since 2011. Just hours before it was set to expire, the Security Council this evening voted unanimously to extend the Mission’s mandate for one day and is expected to come back to the matter tomorrow afternoon. 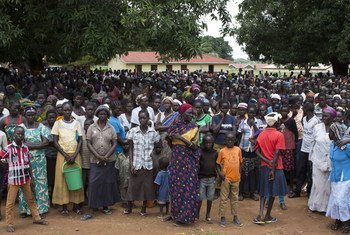 14 December 2016
The United Nations human rights chief today urged the African Union to quickly establish the hybrid court for South Sudan to investigate and prosecute those bearing criminal responsibility for the atrocities.