14 December 2016
According to new data from the UN Food and Agriculture Organization (FAO), global production of wood products has been increasing for the past six years, while wood trade saw a slight decline.

“Our data registers a healthy growth in the global production of wood products and a rapid growth in production and trade of relatively new products […] indicating that the forest industry is adapting to changes and has huge potential to become a key player in emerging bio-economies,” said Mats Nordberg, FAO Senior Forestry Officer.

The data also suggests that the growth in the production volume ranged from between one to eight per cent, and was mainly triggered by the continuous economic development in Asia, a recovering housing market in North America, and expansion of the bioenergy targets.

In addition, FAO reported a small decrease in global trade value of wood and paper products from $267 billion in 2014 to $236 billion last year.

According to the agency, Estonia, Latvia, and Lithuania produced and exported 3 million tonnes of pellets in 2015, overtaking Germany and Canada. The global markets of wood pellets were dominated by Europe and North America, with the US and Canada accounting for over one-third of global pellet production, and the UK, Denmark and Italy accounting for some 80 per cent of global pellet imports (UK alone 52 per cent).

FAO has also incorporated global figures on Oriented Strand Board (OSB), a type of wood panel commonly used in construction, in its statistical database.

The numbers have also shown a fall in production of graphic paper for publishing and writing from 2.3 per cent or by 3 million tonnes in just one year, reaching its lowest level since 1999. This decrease reflects a widespread global shift towards electronic media and mobile technology.

“FAO’s database on wood production provides a crucial tool in the context of measuring progress towards targets set out in the Paris Agreement on climate change and the 2030 Agenda on Sustainable Development, since it can help countries enable sustainable forest management and scale up forestry's greenhouse gas mitigation potential,” added Mr. Nordberg.

The FAO’s wood products statistics from 1961 onwards are now available in a new and more user-friendly format in the FAOSTAT database. 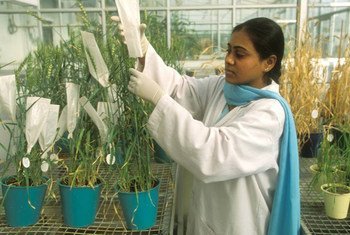 13 December 2016
The United Nations announced today at a meeting of the world’s top agricultural scientists, that in order to achieve world’s Sustainable Development Goals (SDGs) of defeating hunger and poverty by 2030, governments and the private sector must increase commitment to agricultural science and technology research.