Following the recent global commemoration of the 10th anniversary of the Convention on the Rights of Persons with Disabilities, a United Nations human rights expert today issued a warning that some of the most basic components of the convention have yet to be realized and that urgent steps are necessary to level inequalities.

According to Devandas Aguilar, overall progress is “only peripheral,” and swift action is necessary to ensure that the some 1 billion adults and at least 93 million children living with disabilities are guaranteed their full rights.

“Thanks to the Convention, every one of them can claim rights that relate to every single area of their lives. It is now vital to ensure that this translates into significant improvements and tangible changes in their lives,” the Special Rapporteur said in a news release from the Office of the UN High Commissioner for Human Rights (OHCHR).

According to the expert, many countries are failing to meet the goals of the Convention.

“Many States have declared their desire to protect persons with disabilities through public policies and social protection systems,” said Ms. Aguilar. “But all too often, these same systems promote exclusion and limited participation – for example, by institutionalization or social benefits that discourage people joining the open labour market.

She reported that while States continue to reaffirm their commitments to equal rights for persons with disabilities, they simultaneously deny these groups the ability to exercise their legal rights and freedom of choice.

She hailed the progress of some States who have implemented new laws, policies, and programmes that place disability issues at the heart of international progress, but lamented that others do not seem to understand the advanced model of human rights and disabilities that are set forth in the Convention.

“They may have decided in principle to act, but still struggle with issues as basic as inclusion, non-discrimination, reasonable accommodation, and support services,” said the UN Special Rapporteur.

Ms. Aguilar’s statement was endorsed by the Independent Expert on the enjoyment of human rights by persons with albinism, Ikponwosa Ero; the Special Rapporteur on the right of everyone to the enjoyment of the highest attainable standard of physical and mental health, Dainius Puras; and the Special Rapporteur on the sale of children, child prostitution, and child pornography, Maud de Boer-Buquicchio.

Special Rapporteurs are appointed by the United Nations Human Rights Council to examine and report back on a specific human rights theme or a country situation. Their positions are honorary they are neither staff nor paid for their work. 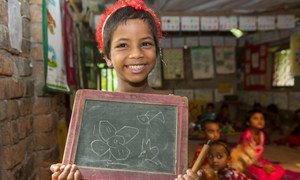