The Global Fund/Nana Kofi Acquah
A home-based caregiver in a village near Kayar, Senegal, provides basic healthcare services, including malaria treatment for patients living in areas where there are no healthcare facilities.
13 December 2016

Despite major progress in the fight against malaria, the mosquito-borne disease remains an acute public health problem, particularly in sub-Saharan Africa, home to 90 per cent of the world’s malaria cases, according to an annual flagship report by the World Health Organization (WHO).

“We are definitely seeing progress,” said Pedro Alonso, Director of the WHO Global Malaria Programme, in a news release on the World Malaria Report 2016.

“But the world is still struggling to achieve the high levels of programme coverage that are needed to beat this disease,” he added.

The report reveals that children and pregnant women in sub-Saharan Africa have greater access to effective malaria control. Across the region, a steep increase in diagnostic testing for children and preventive treatment for pregnant women has been reported over the last five years. Among all populations at risk of malaria, the use of insecticide-treated nets has expanded rapidly.

In many countries, health systems are under-resourced and poorly accessible to those most at risk of malaria. In 2015, 36 per cent of children with a fever were not taken to a health facility for care in 23 African countries.

There are still substantial gaps in the coverage of core malaria control tools. In 2015, an estimated 43 per cent of the population in sub-Saharan Africa was not protected by treated nets or indoor spraying with insecticides, the primary methods of malaria vector control.

At the 2015 World Health Assembly, member States adopted the Global Technical Strategy for Malaria 2016-2030, which set ambitious targets for 2030 with milestones every 5 years to track progress.

Eliminating malaria in at least 10 countries is a goal for 2020. The report shows that prospects for reaching this target are bright: In 2015, 10 countries and territories reported fewer than 150 indigenous cases of malaria, and a further nine countries reported between 150 and 1,000 cases.

World Health Organization (WHO) Malaria Report reveals that across the sub-Saharan African region, a steep increase in diagnostic testing for children and preventive treatment for pregnant women has been reported over the last five years.

Countries that have achieved at least three consecutive years of zero indigenous cases of malaria can apply for the WHO certification of malaria elimination. In recent months, the WHO Director-General certified that Kyrgyzstan and Sri Lanka had eliminated malaria.

Last month, WHO announced that the world’s first malaria vaccine would be rolled out through pilot projects in three countries in sub-Saharan Africa. Vaccinations will begin 2018.

Sustained and sufficient funding for malaria control is a serious challenge. Despite a steep increase in global investment for malaria between 2000 and 2010, funding has since flat-lined. In 2015, malaria funding totalled $2.9 billion, representing only 45 per cent of the funding milestone of $6.4 billion for 2020. 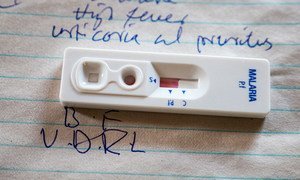