‘It is past time for you to act’ to end carnage in Aleppo, UN chief tells emergency Security Council session

OCHA/Romenzi
A child standing amid debris on a street in Aleppo. (file)
13 December 2016

Aleppo should represent the end of the quest for military victory, not the start of a broader military campaign in a country already ravaged beyond all recognition by five years of war, United Nations Secretary-General Ban Ki-moon told an emergency meeting of the Security Council today, calling on the 15-member body to “do all we can to stop the carnage” and ensure that all the parties in the “wretched” conflict seek an inclusive political resolution.

Amid mounting international concern about the tragic situation in Aleppo, Mr. Ban said that during the last 48 hours, the world has witnessed an almost complete collapse of armed opposition front-lines, leaving them with only five percent their original territory in the city.

Outlining the lack of unified action to stop the carnage, despite numerous warnings of the consequences of such inaction, including those by his Special Envoy for Syria, Staffan De Mistura, the Secretary-General expressed: “I have said before that we have collectively failed the people of Syria. The Security Council has not exercised its preeminent responsibility with regard to the maintenance of international peace and security.”

“History will not easily absolve us, but this failure compels us to do even more to offer the people of Aleppo our solidarity at this moment,” he said.

Mr. Ban also drew attention of the Council members to the General Assembly’s overwhelming call, urging preventative by the Security Council on Aleppo but said that when presented with opportunity to act over the last three months, “this Council has failed.”

“Since September, the Security Council has failed to adopt three resolutions that could have enabled a humanitarian truce, evacuation of civilians and the entry of lifesaving aid,” he added. 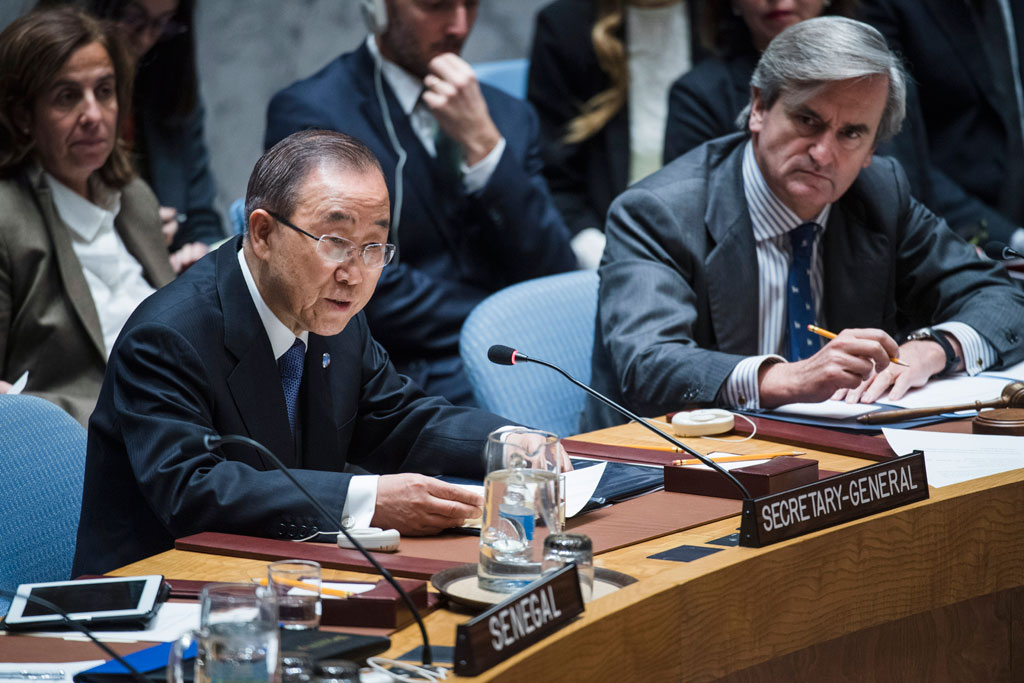 Against this backdrop, the UN has continued to receive reports that civilian deaths and injuries continue at a brutal pace, said the Secretary-General, citing specific reports that scores of civilians have been killed either by intense bombardment or summary executions by pro-Government forces.“We have seen shocking videos of a body burning in the street, ostensibly after aerial bombardment, [the Office of the UN High Commissioner for Human Rights] has received reports of civilians, including women and children, in four neighbourhoods being rounded up and executed,” said the Secretary-General, echoing statements from UN human rights chief Zeid Ra'ad Al Hussein.

Indeed, earlier today, the High Commissioner pleaded with the international community “to heed the cries” of the women, men and children being terrorized and slaughtered in Aleppo and to take urgent steps to ensure that the tens of thousands of people who have fled, surrendered or been captured are treated in line with international law.

“The crushing of Aleppo, the immeasurably terrifying toll on its people, the bloodshed, the wanton slaughter of men, women and children, the destruction – and we are nowhere near the end of this cruel conflict,” said High Commissioner Zeid in a news release issued the UN human rights arm (OHCHR).

What is happening with Aleppo could repeat itself in Douma, in Raqqa, in Idleb. We cannot let this continueHigh Commissioner Zeid

“What can happen next, if the international community continues to collectively wring its hands, can be much more dangerous,” he warned.

According to the release, the UN human rights office (OHCHR) has received credible reports of scores of civilians being killed – either by intense bombardment or summary execution by pro-Government forces.

“Dozens of bodies reportedly litter the streets of a number of east Aleppo neighbourhoods, with residents unable to retrieve them due to the intense bombardment and fear of being shot,” the release said, adding: “Government forces and their allies are also reportedly entering civilian homes and killing people.”

The release also stated that according to reports from multiple sources, pro-Government forces killed at least 82 civilians, including 11 women and 13 children, in the Bustan al-Qasr, al-Ferdous, al-Kallaseh, and al-Saleheen neighbourhoods yesterday.

OHCHR further cautioned that thousands of people who remain in areas under the control of armed groups are at risk of grave violations, including detentions, torture and killings.

Emphasizing the Syrian Government’s obligation to protect the right to life of all civilians as well as that of fighters who have surrendered, or laid down their weapons, are sick or wounded or otherwise hors de combat (no longer participating in hostilities), Mr. Zeid said that it must provide medical assistance to all sick and wounded, civilians and fighters alike, “without any discrimination.”

However, according to OHCHR, “reports suggest that of those fighters who have fled, some were reportedly caught and killed on the spot while others were arrested.”

High Commissioner Zeid further underlined that in the absence of independent monitors on the ground and “given the terrible record of arbitrary detention and torture in Syria even prior to the start of this conflict,” urgent measures must be taken to ensure the protection of the people who have fled Aleppo.

“The world is watching Aleppo – and we are documenting the violations being committed against its people, with the firm conviction that one day those who are responsible will be held to account. We must ensure that this happens. The hellish suffering to which the people of Syria are being subjected must stop,” he concluded.

Expressing “outrage” at the escalation of violence in Syria, particularly war-battered Aleppo, the General Assembly – the universal body comprising all 193 United Nations Members States – today adopted a resolution demanding an immediate and complete end to all attacks on civilians as well as an end to all sieges in war-ravaged country.