The General Assembly today paid a tribute to United Nations Secretary-General Ban Ki-moon for his “never-tiring service to humanity” over the past decade, while also swearing in his successor António Guterres, who will assume his duties on 1 January 2017.

The General Assembly today paid a tribute to United Nations Secretary-General Ban Ki-moon for his “never-tiring service to humanity” over the past decade, while also swearing in his successor António Guterres, who will assume his duties on 1 January 2017.

“Over the last ten years, Secretary-General Ban has led the United Nations with unwavering principles for the good, with dedicated professionalism, and with never-tiring service to humanity,” said General Assembly President Peter Thomson, following the adoption of a resolution by which the 193-member body acknowledged Mr. Ban’s exceptional contribution to the work of the UN, and noteworthy achievements.

“Whether it was shifting international dynamics, a rebalancing of economic influence, rapid technological advances, or the rising interconnectivity and mobility of people, Secretary-General Ban was always in the vanguard,” Mr. Thomson added.

Among the long list of his accomplishments, Mr. Thomson cited three in particular: the Secretary-General’s unceasing efforts on the issue of climate change, which ultimately led to the adoption and entry into force of the Paris Agreement; his vision and determination to realize a more just, prosperous and secure world through the adoption of the 2030 Agenda for Sustainable Development; and his support for gender equality, including the establishment of the UN Entity for Gender Equality and the Empowerment of Women, known as UN Women.

Earlier, by acclamation the Assembly adopted a resolution of tribute to Mr. Ban’s, “placing on special record his many bold initiatives – political, diplomatic and organizational […] and his exceptional contribution to the work of the Organization, and his noteworthy achievements in improving people’s lives and protecting our planet for future generations.”

In response, Mr. Ban said “serving as Secretary-General of this great Organization, has been a great privilege for me of a lifetime.”

The General Assembly gives Secretary-General Ban Ki-moon a standing ovation following the Assembly's adoption of a resolution paying tribute to his service to the United Nations. UN Photo/Eskinder Debebe

Recalling his childhood, he said: “After the Korean War, UN aid fed us. UN textbooks taught us. UN global solidarity showed us we were not alone. For me, the power of the United Nations was never abstract or academic.”

He said he has seen the power of international cooperation in taking on most pressing challenges and has seen the UN open its doors wider than ever to civil society and many partners to help transform the world.

He said his 10-year tenure was filled with challenges, including the worst financial collapse since the Great Depression, eruptions of conflict and uprisings for freedom and record numbers of people fleeing war, persecution and poverty.

Outgoing UN Secretary-General Ban Ki-moon describes the responsibility entrusted to him ten years ago as "a great privilege of a lifetime." Credit: UN News Centre

But “day by day, brick by brick, we built stronger foundations for peace and progress,” he stressed, adding that still, so many problems have proven intractable - none more than the bloodshed in Syria and the upheaval it spawned.

“I have maintained a focus on people’s dignity and rights – the pillars of our common humanity. I have sought to stand up for the vulnerable and those left behind today. And I have tried to be sure that we are doing all we can so that future generations can live in peace,” Mr. Ban said. “Even as I prepare to leave, my heart will stay as it has since I was a child – right here with the United Nations.”

The Assembly rose in prolonged applause at the end of Mr. Ban’s speech.

The UN General Assembly paid tribute to outgoing Secretary-General Ban Ki-moon, for his "dedication and never-tiring service to humanity." 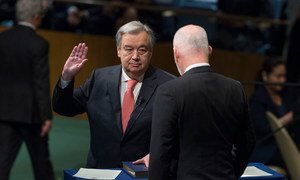