No country is immune, and every country bears a responsibility to end corruption, United Nations Secretary-General Ban Ki-moon said today, warning that corruption is a “broad barrier” in the path to world's achievement of the 2030 Agenda for Sustainable Development.

“Corruption strangles people, communities and nations. It weakens education and health, undermines electoral processes and reinforces injustices by perverting criminal justice systems and the rule of law, the Secretary-General said in his message to mark International Anti-Corruption Day.

By diverting domestic and foreign funds, corruption wrecks economic and social development and increases poverty. “It harms everyone, but the poor and vulnerable suffer most.” he added.

Mr. Ban also highlighted the theme of this year's observance: 'Corruption: An impediment to the Sustainable Development Goals (SDGs),' adding that implementation of the UN Convention against Corruption should not be the only step taken to resolve the issue.

“On International Anti-corruption Day, let us reaffirm our commitment to ending the deceit and dishonesty that threaten the 2030 Agenda and our efforts to achieve peace and prosperity for all on a healthy planet,” stated the Secretary-General.

In a separate statement Yury Fedotov, Executive Director of the UN Office on Drugs and Crime (UNODC) explained that the G20 estimates that $90 trillion in infrastructure investment is required between 2015 and 2030 to support global growth and development. “If we do not unite to successfully eliminate corruption, we risk economic growth being slowed and prosperity muzzled.”

He called for a “wholehearted and determined” contribution to global anti-corruption efforts from the world's public and private sectors, and noted that the 2030 Agenda's Goal 16, on peaceful and inclusive societies, seeks substantial reductions in corruption and bribery. And in that regard, UNODC has created a comprehensive approach that includes the UN Convention and its “cutting edge” peer review mechanism.

Mr. Fedotov said that at the local level, UNODC works with countries to offer technical advice on invaluable legislative reform and to help build capacities in the area of law enforcement and successful prosecutions. 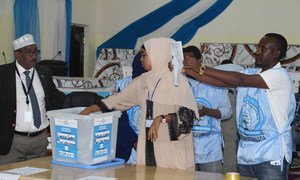 The United Nations and other members of the international community have commended the efforts of Somalia’s electoral bodies to ensure a credible and legitimate electoral process and supported the bodies’ decisions to disqualify candidates who engaged in corruption, intimidation and manipulation in the ongoing parliamentary elections.