UNICEF/UN035877/LeMoyne
In Jérémie, Haiti, children play at the Église Chrétienne Nan Lindy. Hundreds of people have sought temporary shelter at the church after countless homes were destroyed by Hurricane Matthew.
9 December 2016

As the United Nations Children's Fund (UNICEF) prepares to mark the 70th anniversary of its work for the world's most vulnerable children, the agency today issued a stark warning that despite significant progress, too many children are still being left behind, with nearly 535 million of them living in harsh conditions, lacking access to decent health, education and protection services.

“UNICEF was established to bring help and hope to children whose lives and futures are endangered by conflict and deprivation, and this enormous figure – representing the individual lives of half a billion children – is a sharp reminder that our mission is becoming more urgent every day,” said UNICEF Executive Director Anthony Lake in a news release ahead the anniversary, which will be commemorated on 11 December.

Violence in many areas across the globe, especially in the Middle East region, has had a devastating effect on millions of children and families. In Syria, nearly 500,000 children live under siege, cut off from basic services. While in north-eastern Nigeria, almost one million children are displaced. In Afghanistan, half of primary-aged children are out of school, and the conflict in Yemen has impacted almost 10 million children.

These are just some of the regions where children live in a state of emergency, says UNICEF. Overall, too many children are still being left behind, excluded because of their gender, race, religion or disability, “or simply because they are children.”

Mr. Lake added: “Whether children live in a country in conflict or a country in peace, their development is critical not only to their individual futures but also to the future of their societies.” 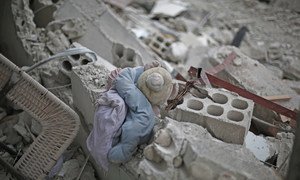 Returning from a mission to Aleppo, a senior United Nations Children's Agency (UNICEF) official in Syria described “haunting images” of children killed by mortars and malnourishment, and said that the terrible situation “continues to plummet to even greater lows.”