FAO/ Justine Texier
Haitians line up to receive bags of planting seeds in Jeremie, Grand'Anse Department, one of the areas hit hardest by Hurricane Matthew.
6 December 2016

Responding to the devastation wrought by Hurricane Matthew in Haiti, particularly to the agriculture sector, United Nations agricultural and emergency food relief agencies are deploying programmes that address both the immediate and long-term food needs in the affected areas.

“Hurricane Matthew not only eliminated the last harvest – it also compromised the upcoming planting season and the country's ability to feed itself,” Nathanael Hishamunda, the UN Food and Agricultural Organizational (FAO) Representative in Haiti, said in a news release today.

“These communities need urgent support to prevent them from adapting survival strategies that put them into a vicious cycle of dependence, including eating seeds meant for producing food in future harvests,” he added.

Post-hurricane assessments revealed “extensive” damage to crops – amounting to about $580 million with crops, livestock and fisheries, as well as to infrastructure, almost completely destroyed in some areas. The damage left 1.4 million Haitians in need of food assistance, with more than 800,000 people in urgent need of food aid.

In their response, FAO and the UN World Food Programme (WFP) are providing food aid, as well as seeds and planting materials to ensure that farmers can grow vegetables to recover their livelihoods and feed their communities in the months to come.

Last week alone, FAO started distribution of some 15 metric tonnes of seeds (as emergency supplies) to some 22,500 people in Marfranc (Grand'Anse), one of the hardest-hit areas. It is estimated that these seeds will produce about 75 tonnes of green beans and 90 tonnes of lima beans for hurricane-affected families.

Some 2.2 million cuttings of sweet potato – a food source rich in complex carbohydrates, fibre and some vitamins – will also be provided for planting in the winter growing season.

In all, the FAO emergency intervention for the winter staple crop season and short-cycle crops is anticipated to reach more than 125,000 people in more than 25,000 households by mid-December. The agency is also providing immediate assistance to 1,500 and 2,000 families engaged in fishing and herding, respectively.

2017 spring planting is going to be crucial

Looking ahead to 2017, the agency underscored that the spring agricultural season, starting in April will be “crucial” as it traditionally accounts for about a sixth of the country's annual production and is the main source of food for rural households.

To support the affected population, FAO said that it will provide seeds, tools, financial resources as well as technical trainings. Livestock and fish farmers will be provided corresponding inputs such as vaccinations, equipment's and the like.

Funding, however, remains a critical factor as the $9 million FAO appeal is less than 40 per cent funded.

The situation is particularly stark for the agency's longer-term appeal of $30 million that targets 600,000 severely food insecure Haitians over a 12-month period, which has received only $1.5 million thus far. 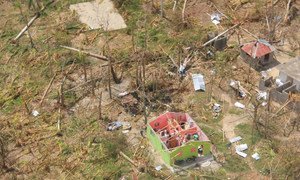