Braving the consequences of war, natural disaster and other emergencies, nearly two million children in 20 countries around the world have been able to continue their schooling over the past four years as a result of a partnership between the European Commission's department for humanitarian aid and civil protection and the United Nations Children's Fund (UNICEF).

“Children are prepared to go to extraordinary lengths to continue their education even in the worst of circumstances,” UNICEF Deputy Executive Director Justin Forsyth said in a press release.

Of the 462 million school-aged children and young people living in countries affected by emergencies, an estimated 75 million are in desperate need of educational support. Even so, education continues to be one of the least funded sectors in humanitarian appeals. At present, less than two per cent of the global humanitarian budget goes for this purpose.

”It's up to the rest of us to make sure the necessary resources are available for them. The European Union has set an example by committing to increase the EU humanitarian aid budget to education in emergencies to six per cent in 2017 and we hope others will do the same,” said Mr. Forsyth.

During the Brussels event, child and youth representatives presented their own call for stronger international support for programmes that allow children caught up in emergencies to continue their learning. 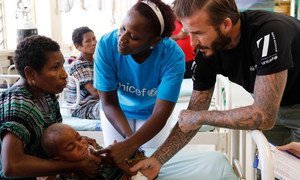 Drawing attention to the physical and psychological abuse that leave an inedible mark on children’s lives, the United Nations Children’s Fund (UNICEF) launched a powerful new video illustrating the “all too common” forms of violence as tattoos on the body of the famous footballer and advocate for protection of children, David Beckham.