The United Nations Security Council today failed to adopt a resolution calling for a seven-day ceasefire in Aleppo that would allow humanitarian aid to reach people trapped in the war-ravaged Syrian city.

The text received 11 in favour, to three against (China, Russian Federation and Venezuela), with Angola abstaining.

This outcome followed the Council’s unsuccessful attempts on 8 October to act on ending the bloodshed in Syria’s besieged eastern Aleppo. That day, the Council voted on two resolutions, the one proposed by France and Spain and the other tabled by Russia.

The draft resolution tabled today would have had the Council “decide that all parties to the Syrian conflict shall cease, 24 hours after the adoption of this resolution, any and all attacks in the city of Aleppo, including with any weapons, including rockets, mortars, and anti-tank guided missiles, and including shelling and airstrikes, to allow urgent humanitarian needs to be addressed for a period of seven days.”

It would also have had the Council “expresses its intention to consider further extensions for seven-day periods on a recurring basis, and demands that all parties allow and facilitate immediate, safe, sustained and unimpeded humanitarian access to all of Aleppo by the United Nations and its implementing partners.”

A child standing in front of his ground-flattened school after a bombardment in Ainjara village in rural Aleppo, Syria. Photo: UNICEF/Khalil Alshawi

According to the 5 December situation report by the UN Office for the Coordination of Humanitarian Affairs (OCHA):

Hostilities continued over the last 48 hours, but no additional displacement was reported on 3 and 4 December. An estimated 31,500 people from eastern Aleppo remained displaced within the entire city throughout the last six days.

On 5 December, three NGOs in eastern Aleppo suspended all their health and nutrition activities. This decision follows the killing of one humanitarian staff and the attack on an NGO warehouse.

In western Aleppo, poor living conditions in the cotton factory shelter have prompted the vast majority of 10,000 IDPs accommodated there to leave the shelter, and most of them now stay with family and acquaintances elsewhere in western Aleppo or in northern rural Aleppo.

With the onset of winter, insufficient and inadequate shelter space is currently the biggest issue faced by IDPs. In addition, the need for more food distribution, particularly hot meals, and ready to eat meals, proper health care, especially for children, and increased protection requirements have been noted.

With its plans to deliver assistance to besieged eastern Aleppo approved by the Government of Syria under the December convoy plan, the UN stands ready as soon as security and access guarantees can be obtained from all parties to the conflict. The UN will also provide humanitarian assistance to Kurdish-controlled Sheikh Maqsoud provided it receives authorization to do so in the light of complex security and bureaucratic procedures. 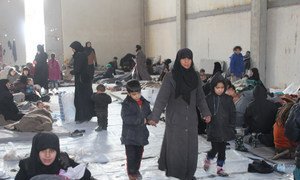 While reiterating its extreme concern about the civilian population in Syria’s war-battered Aleppo, the United Nations refugee agency today said it is also focusing on the rapidly growing shelter needs for thousands of people fleeing the city’s eastern neighbourhoods.