Drawing attention to the physical and psychological abuse that leave an inedible mark on children’s lives, the United Nations Children’s Fund (UNICEF) launched a powerful new video illustrating the “all too common” forms of violence as tattoos on the body of the famous footballer and advocate for protection of children, David Beckham.

These images depict long-lasting scars of violence and abuse that millions of children around the world are subjected to the in spaces where they should be safe – their homes, schools, online and in their communities, said UNICEF in a news release.

“Violence and abuse take a terrible toll on children’s lives and futures – harming their bodies, undermining their emotional wellbeing, even interfering with the healthy development of their brains,” said UNICEF Executive Director Anthony Lake.

According to the agency, every five minutes, a child dies as a result of violence. Globally approximately one in 10 girls under the age of 20, or 120 million girls worldwide, have been subjected to sexual violence, and a third of all students between 13 and 15 are regularly bullied.

Every year nearly a billion children – or six in 10 children globally – between the ages two to 14 worldwide are regularly subjected to physical punishment by their caregivers.UNICEF statistics on violence against children

In his campaign against violence against children, the star football player has travelled around the world to advocate for protection of children. Recalling his visit to Cambodia last year, he said:

“I was shocked by what I heard and I saw how violence can leave deep and lasting scars. No child should have to endure this. Yet in all corners of the world, in their homes, schools and on their streets, children are suffering similar violence.”

“I hope this new project will draw attention to this urgent issue and inspire action. Violence against children is wrong and together we need to end it,” he added. 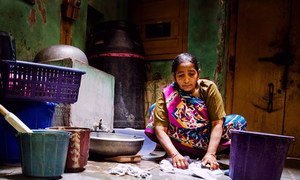