With the humanitarian crisis in Syria’s devastated city of Aleppo deteriorating by the day, the United Nations Special Envoy for the country appealed for a pause in fighting so that much needed relief can reach the city’s population and those with urgent medical emergencies can be evacuated.

“The most urgent need now is shelter, particularly with the approaching winter,” said Special Envoy Staffan de Mistura, who, together with his Special Advisor, Jan Egeland, briefed the press in Geneva after today’s meeting of the Humanitarian Access Task Force of the International Syria Support Group (ISSG).

The ISSG has established the respective taskforces on humanitarian aid delivery and a wider ceasefire. They have been meeting separately since early this year on a way forward in the crisis. Russia and the United States are the co-chairs of the taskforces and the ISSG, which also comprises the UN, the Arab League, the European Union and 16 other countries.

Calling on the fighters of the Al Nusra front to leave the city, the Special Envoy added: “This will contribute to avoiding bloodshed and increase our leverage on insisting for an urgent pause.”

“In the whole month of November, a crucial month to preposition supplies [before winter sets in], we reached only eight per cent of people in the besieged areas,” he said, adding that the humanitarian response plan for December was yet to be approved by the Government.

“Today is 1 December [and] we are losing time,” he said, explaining that as the weather turns, deliver of aid and other humanitarian operations will slow down.

On the desperate medical situation, Mr. Egeland reported that conditions are so bad that life-saving operations have to be conducted in basements and without anesthesia – the medical element that prevents patient from feeling severe, intolerable pain during the medical procedure.

“Imagine – having your child rushed to an unsanitary basement and being operated on without anesthesia – these are conditions in Eastern Aleppo,” he stressed.

He further reported that immunization campaigns in Syria fell desperately short of their targets in providing children with inoculations (reaching only some 17 per cent and 25 per cent in the last two rounds, respectively). “The ones who are suffering the most, the most vulnerable are the children [with] diseases and epidemics just around the corner, if [they are not provided with] vaccinations,” he highlighted.

Commenting on a recent proposal for four humanitarian corridors, Mr. Egeland said that discussions will be held on ways to maximize the opportunity that might provide by these corridors, such as getting medical supplies and food into Aleppo and evacuating those in urgent medical need.

In the briefing, he further said that protection concerns remain paramount in Aleppo and appealed to all Member States of the UN to urge those fighting in the city to stop. 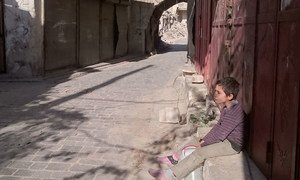 With thousands of civilians fleeing neighbourhoods in eastern Aleppo, senior United Nations officials today appealed to the Security Council and the wider international community to come together and “do everything in their power to protect civilians and enable aid access to the besieged parts of the [war-battered city] before it becomes one giant graveyard.”