ESCAP
Executive Secretary of the UN Economic and Social Commission for Asia and the Pacific (ESCAP) Shamshad Akhtar.
1 December 2016

Issuing a year-end update to its flagship economic and social development report, the United Nations development arm for the Asia-Pacific region said today that resilient domestic demand and policy support supported the region notch a steady growth rate of five per cent but warned that risks remain to financial stability.

“Bouts of financial volatility can re-emerge due to external policy uncertainties in major economies, including those related to the ‘Brexit’ negotiations in Europe and the new administration in the United States,” said Shamshad Akhtar, the Executive Secretary of the UN Economic and Social Commission for Asia and the Pacific (ESCAP), in a news release announcing the report.

“External demand is likely to remain weak, with trade protectionist measures and sentiments, which are already on the rise, resulting in prolonged weakness in global trade and a drag on productivity growth,” she added.

The 2016 year-end update of the Economic and Social Survey of Asia and the Pacific – in publication since 1947 – noted that stable economic conditions in the second half of this year provide an opportunity to internalize the economic, social, environmental and governance dimensions of sustainable development in a comprehensive manner.

It also highlighted that as the region undergoes further structural transformation, efforts to lift productivity and innovation should be matched by measures to enhance worker skills and social protection systems.

The year-end update further recommend that fiscal policy “can and should play” a proactive role in supporting domestic demand and meeting long-term development priorities and concluded that effective economic governance can go a long way in enhancing investment, in promoting productivity and in accelerating poverty reduction and mitigating inequalities.

Headquartered in Bangkok, ESCAP – one of the five UN regional commissions – promotes regional cooperation and collective action for sustainable development and supports the region in building and sustaining shared economic growth and social equity.

In addition to the countries lying in the geographic spread of Asia and the Pacific, ESCAP membership also includes France, the Netherlands, the United States and the United Kingdom.

♦ Receive daily updates directly in your inbox - Subscribe here to a topic.
♦ Download the UN News app for your iOS or Android devices.
Financing 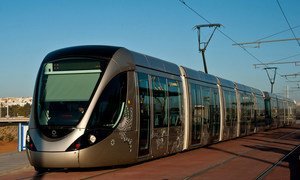 The first-ever United Nations Global Sustainable Transport Conference concluded today in the Turkmen capital, with more than 50 countries endorsing the 'Ashgabat Statement on Commitments and Policy Recommendations,' with a view to supporting cleaner, greener transportation – from local transit systems to worldwide multimodal networks.