“On behalf of the United Nations, I want to say very clearly: we apologise to the Haitian people. We simply did not do enough with regard to the cholera outbreak and its spread in Haiti. We are profoundly sorry for our role,” Mr. Ban told UN Member States at a gathering of the General Assembly at UN Headquarters in New York, and at which he launched his report on the matter, entitled A New approach to cholera in Haiti.

“Eliminating cholera from Haiti, and living up to our moral responsibility to those who have been most directly affected, will require the full commitment of the international community and, crucially, the resources necessary,” he added. “The United Nations should seize this opportunity to address a tragedy that also has damaged our reputation and global mission. That criticism will persist unless we do what is right for those affected. In short, UN action requires Member State action.”

Costing around $400 million over the next two years, the proposed United Nations package will centre on two different elements, known as ‘Track One’ and ‘Track Two.’ The former consists of a greatly intensified and better-resourced effort to respond to and reduce the incidence of cholera, through addressing Haiti’s short- and longer-term issues of water, sanitation and health systems and improved access to care and treatment.

Speaking at UN Headquarters, Secretary-General Ban Ki-moon expresses deep regret for the loss and suffering caused by the cholera epidemic in Haiti, and apologises on behalf of the world body. Credit: UN News Centre

This is expected to involve intensifying efforts to mobilize adequate funding for an increased number of rapid response teams; strengthened epidemiological surveillance; the rapid detection, reporting and treatment of cases; the combined use of cholera vaccinations with targeted water and sanitation interventions; more focused geographical targeting; improved communication and behavioural change strategies; and strengthened support to longer-term water and sanitation services.

“We would like to see improvements in people’s access to care and treatment when sick, while also addressing the longer-term issues of water, sanitation and health systems,” Mr. Ban said. “Work on Track One is [well] under way.” 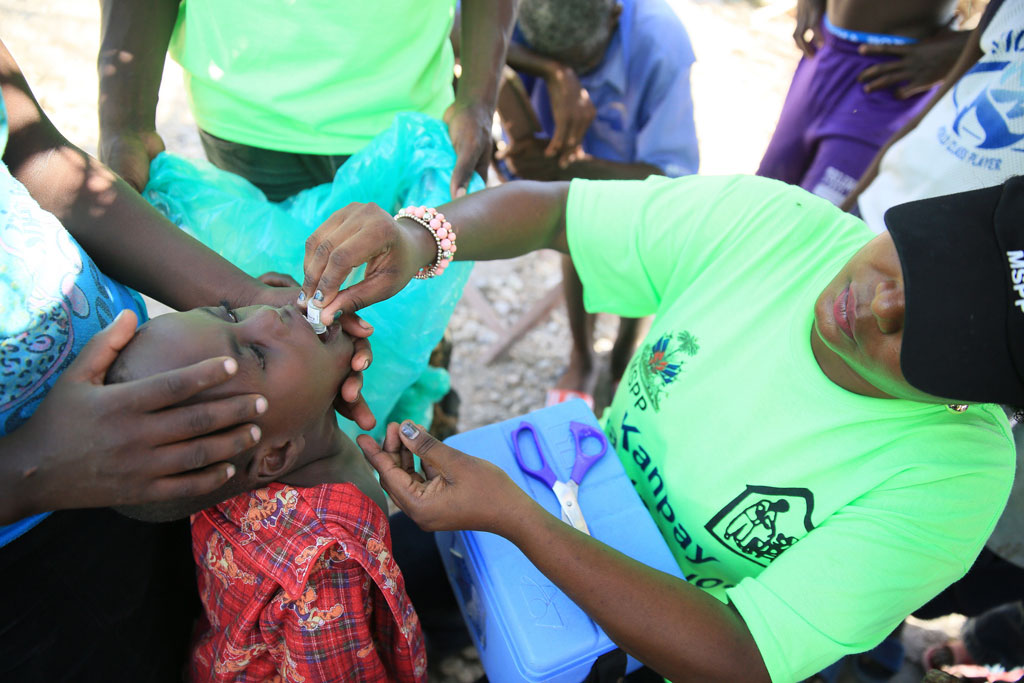 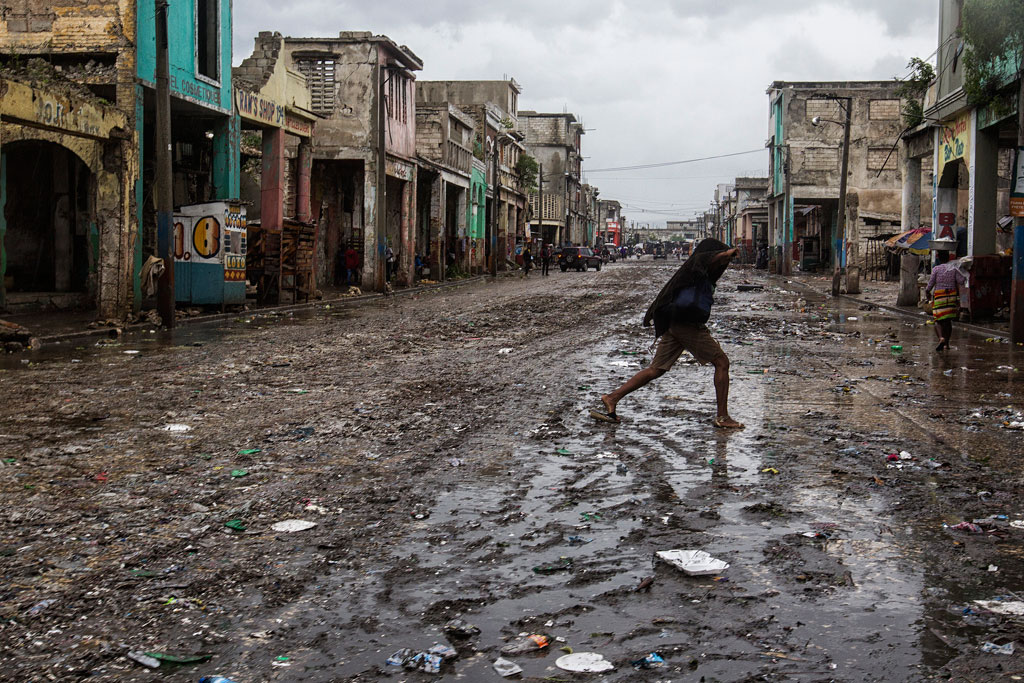 A woman crosses a muddy street in downtown Port-au-Prince after Hurricane Matthew hit Haiti this fall, bringing heavy rains and winds. Based on an assessment conducted by the UN agriculture organization (FAO) and the UN World Food Programme (WFP) on 23 November some 1.4 million Haitians are estimated to need humanitarian assistance of which 806,000 are in need of urgent food aid. UN Photo/ Logan Abassi 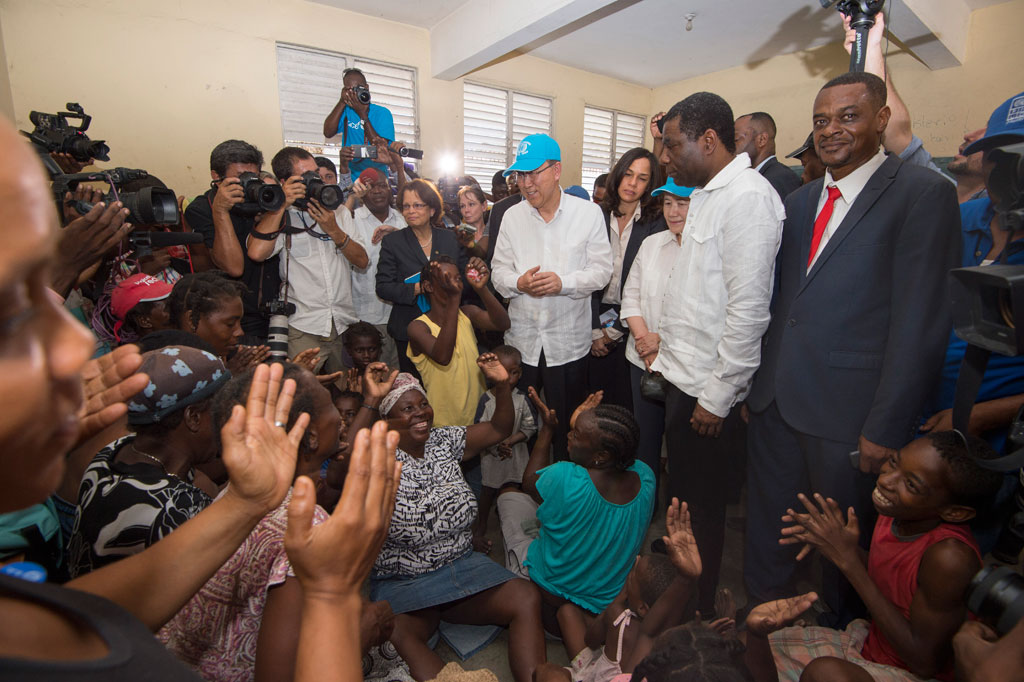 Secretary-General Ban Ki-moon (centre) visits a temporary shelter for victims of Hurricane Matthew in Les Cayes, Haiti, during a trip on 15 October 2016 to meet with communities, Government officials, and humanitarians working in the country. UN Photo/Eskinder Debebe

“Digging a well in Pilate is straight-forward enough – the more challenging aspect to this was to bring the equipment here,” said Lieutenant Michell Vanderson Sena Leal of MINUSTAH’s Brazilian Engineering Company, after finishing up a well in the Plaisance Arrondissement in the early fall of 2016. The area had been identified earlier as one of 15 communities under “red alert” status for the country’s cholera outbreak. Photo: MINUSTAH

On the 12th of January 2012 a devestating eathquake with 7.0-magnitude hit the country, and is estimated to have affected one third of the Caribbean nation’s nine million people. “My heart goes out to the people of Haiti after this devastating earthquake,” said Secretary-General Ban Ki-moon that day. Shown are the remains of a cathedral in Port-au-Prince. UN Photo/Marco Dormino.

This photo is taken after tropical Storm Jeanne devastated Haiti in September 2004. Humanitarian aid is disembarked from a United Nations helicopter. In the wake of a series of deadly hurricanes and storms to sweep the Caribbean region Haitian authorities reported that at least 1,300 people are dead and more than 1,000 others are missing. UN Photo/Sophia Paris

A photo taken in 13 May 1997 of a Haitian family living in the countries capital Port-au-Prince. At the time seventy-five per cent of the population of Haiti subsists in abject poverty, below the poverty line, as defined by the World Bank. UN Photo/Eskinder Debebe.

“Track Two is a concrete expression of the regret of our Organization for the suffering so many Haitians have endured. On that basis, we propose to take a community approach that would provide a package of material assistance and support to those most severely impacted by cholera,” Mr. Ban said. “The support would be based on priorities established in consultation with communities, victims and their families.”

According to the Secretary-General’s report, preliminary consultations have been held in both New York and Haiti with the United Nations country team, experts, human rights and advocacy groups and networks, non-governmental organizations, the United States Centers for Disease Control and Prevention, the Haitian Government and other Member States. In addition, information has been gathered with respect to the impact of cholera in Haiti, the systems established to record infections and deaths, and the records and data that might be available, in order to consider and assess the feasibility of potential elements of the package.

While stating that "some have urged that the package also include an individual component, such as the payment of money to the families of those who died of cholera," the UN chief said further on-the-ground consultations would be needed, while also acknowledging the difficulties involved.

“This approach would require identification of the deceased individuals and their family members. It would also require the certainty of sufficient funding to provide a meaningful fixed amount per cholera death,” Mr. Ban said. “Additional evaluation is needed on whether and how the limitations of information on deaths from cholera – including the identities of the victims – can be addressed and on the challenges and costs associated with that effort. Whatever the eventual design of the package, a familiar obstacle once again stands in the way: adequate funding.”

Informal meeting of the General Assembly to hear a briefing on the United Nations’ new approach to cholera in Haiti. UN Photo/Eskinder Debebe

The issue of funding for the package resonated throughout the Secretary-General’s remarks.

“I understand the reaction of being overwhelmed by what seems to be a never-ending list of pressing humanitarian needs around the world. In Haiti’s case, the hurricane has brought added suffering and understandably diverted resources,” Mr. Ban told the Member State representatives.

“Yet,” he continued, “I want to stress that on the scale of global humanitarian and development needs, limited sums are required to eliminate cholera in Haiti. This mission is realistic and doable. Cholera is a treatable and preventable disease. It can be controlled and eliminated. What is standing in the way is adequate resources and means of delivery.”

According to the Secretary-General’s report on the issue, funding is a key aspect for this track. For the past six years, both the immediate response and longer-term efforts have been severely hampered by funding shortages, which have made it impossible to fully treat or eliminate what is generally a treatable and preventable disease.

In his remarks, the Secretary-General also highlighted how the response to the epidemic would be an “important test” for the international community – a test of its commitment to the most vulnerable, of its long-standing relationship with the Haitian people, of its ability to demonstrate compassion while preserving the ability to do good in many other places around the world, and a test of its collective responsibility for the crucial endeavour of peacekeeping.

“I will not pretend that this new approach is without risks or difficulties,” he said. “Without your political will and financial support, we have only good intentions and words. Words are powerful – yes. Words are necessary – yes. But words cannot replace action and material support.”

“So many people have suffered grievously. The United Nations and its Member States have the power to recognize and respond to that suffering,” he added. “Let us step up in solidarity to our moral duty and do the right thing for the Haitian people and our United Nations.”

The response to cholera in Haiti will be a “long and thorough battle,” but the United Nations will stand by the Haitian people and authorities, Stéphane Dujarric, the Spokesperson for the Secretary-General, said on the eve of the launch of the world body's new approach to tackling the epidemic in the country.