UN Photo/Rick Bajornas
The Security Council unanimously adopted a resolution, condemning in the strongest terms the nuclear test conducted by the Democratic People’s Republic of Korea (DPRK) on 9 September 2016, and strengthening the sanctions regime imposed on that country.
30 November 2016

Through a unanimously adopted resolution, the 15-member Council reaffirmed that the DPRK should not conduct any further nuclear tests, launches using ballistic missile technology, or any other provocation.

The sanctions target revenue sources for the North-east Asian country’s nuclear or ballistic missile programmes, with the Council for the first time imposing a limit on how much coal the DPRK can export per year.

According to the resolution, total exports of coal from the DPRK to all Member States should not exceed $400 million or 7.5 million metric tonnes annually, whichever is lower, beginning January 1, 2017. For the remainder of this year, the ceiling is $53.4 million, or one million metric tonnes.

“I welcome the unanimous adoption of this new resolution. Maintaining such unity is crucial in tackling security challenges on the Korean Peninsula and beyond,” Mr. Ban told the Council.

This year, the Council has met on nine occasions in emergency consultations in response to the DPRK’s nuclear tests and ballistic missile activities. “This is an unprecedentedly high number,” he said.

The UN Security Council unanimously voted today, 30 November 2016, to impose the “toughest and most comprehensive sanctions regime ever” on the Democratic People’s Republic of Korea (DPRK) over its nuclear weapons programme. Reacting to the Council's vote, Secretary-General Ban Ki-moon said the resolution “sends an unequivocal message that the DPRK must cease further provocative actions and comply fully with its international obligations.”

The resolution adopted today took nearly three months to materialize, following the nuclear test in September. “The time taken to reach agreement on this resolution vividly illustrates the complex nature of the challenge,” Mr. Ban said.“We must assume that, with each test or launch, DPRK continues to make technological advances in its pursuit of a military nuclear capability. The increase in and nature of these activities pose an ever growing threat to regional security and the global non-proliferation regime,” he added, urging all Member States to make every effort to ensure that these sanctions are fully implemented.

The resolution also contains additional measures aimed to further restrict the DPRK’s hard currency revenues, and the activities of the DPRK’s diplomats and other officials. 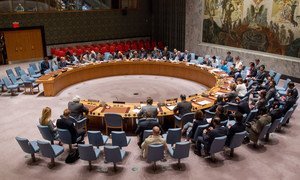