Speaking on behalf of the United Nations, Secretary-General Ban Ki-moon this morning extended condolences to the Cuban people and to the family of former President Fidel Castro Ruz, who passed away overnight at the age of 90.

“At this time of national mourning, I offer the support of the United Nations to work alongside the people of the island,” Mr. Ban told reporters in Ashgabat, Turkmenistan, where he is attending the Global Sustainable Transport Conference. He offered his particular condolences to Cuban President Raúl Castro Ruz.

Recalling vividly his meeting with former President Fidel Castro during a visit to Cuba in January 2014, Mr. Ban said the two had held a lively discussion that covered developments around the world, sustainable development and climate change.

“Under former President Castro, Cuba made advances in the fields of education literacy and health. I hope that Cuba will continue to advance on a path of reform and greater prosperity,” the Secretary-General concluded.

A statement issued later in the day by Mr. Ban's spokesperson in New York noted that former President Castro was an emblematic figure of the Cuban revolution, prominent in Latin America and influential in world affairs.

“As Prime Minister, President, Commander of the Cuban Armed Forces and First Secretary of the Cuban Communist Party, his role at the helm of Cuba spanned nearly 50 years, during which he left a major imprint on his country and on global politics,” the statement said, adding: “His revolutionary ideals left few indifferent. He was a strong voice for social justice in global discussions at the UN General Assembly and international and regional forums.”

In a separate statement, the President of the General Assembly, Peter Thomson also expressed his sincere condolences to former President Castro's family, including his brother President Raul Castro, as well as the Government and People of Cuba.

“Fidel Castro was one of the iconic leaders of the 20th century,” said Mr. Thomson. “With a great love for his homeland and the Cuban people, he dedicated his life to their welfare and development.”

“A tireless advocate for equity in the international arena, Fidel Castro was an inspirational figure for developing countries in particular,” he added, saying that “his dedication to their advancement, especially in the fields of education and health, would be long remembered.” 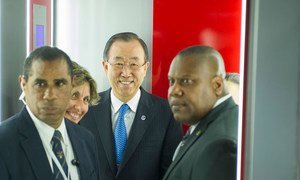 Peace and security, sustainable development and human rights are on the agenda at the second summit of the Community of Latin American and Caribbean States (CELAC), which opens in Cuba today and where United Nations Secretary-General Ban Ki-moon delivered a wide-ranging address.