The first-ever global conference on sustainable transport takes place this weekend in Turkmenistan, bringing together representatives from the United Nations, governments, the private sector and civil society to set new directions for global transport efforts.

“Without doubt, unsustainable transport brings numerous challenges. For example, the transport sector is responsible for about one quarter of greenhouse gas emissions. Also, more than 1.25 million are killed annually in road traffic accidents – sadly to say that 90 per cent [of these] happen in developing countries,” the UN Under-Secretary-General for Economic and Social Affairs, Wu Hongbo, said today at a press briefing in the Turkmen capital of Ashgabat, ahead of the start of the Global Sustainable Transport Conference there tomorrow.

“Sustainable transport, on the other hand, helps create the infrastructure on which we can build a sustainable future – it provides access to trade, jobs, markets, education, health care and other services that improve people’s lives,” Mr. Wu added. “It also empowers women, persons with disabilities, and other vulnerable people. The conference is in Ashgabat is an opportunity for mutual learning and knowledge exchange on implementing sustainable transport.”

According to the UN Department of Economic and Social Affairs (DESA), which Mr. Wu heads and is organizing the event, sustainable transport and mobility are crucial for sustainable development, with adequate transport infrastructure and affordable transport services still lacking globally, and with serious negative impacts on public health and well-being, living conditions and climate change.

The furthering of sustainable transport and the establishment of affordable, economically viable, socially acceptable and environmentally sound transport systems is expected to be a key part of discussions at the conference, which will also be attended by UN Secretary-General Ban Ki-moon.

In his remarks to the media today, Mr. Wu said the linkage between sustainable transport and implementation of the so-called Sustainable Development Goals (SDGs) – a set of goals to end poverty, protect the planet, and ensure prosperity for all as part of a new sustainable development agenda – will be explored in the discussions.

Each SDG has specific targets to be achieved over the next 15 years, and while sustainable transport is not represented by a standalone SDG, it is essential to achieving most of them and has been mainstreamed across several SDGs and targets, especially those related to food security, health, energy, infrastructure and cities and human settlements, according to DESA.

The issues in focus at the conference were recently highlighted in Quito, Ecuador, during the UN Conference on Housing and Sustainable Urban Development (Habitat III), which culminated in the adoption of a New Urban Agenda, with strong elements of sustainable transport.

While no outcome document is expected at the conclusion of the Ashgabat conference, the Secretary-General has encouraged all UN Member States and other stakeholders to register commitments and partnerships for sustainable transport, through the conference website.

Already, commitments to make transport more sustainable have been registered from governments and private partners from a number of countries, including the United States, India, Pakistan, Bangladesh, Australia, and Asia and Pacific Ocean countries.

♦ Receive daily updates directly in your inbox - Subscribe here to a topic.
♦ Download the UN News app for your iOS or Android devices.
sustainable development|transport 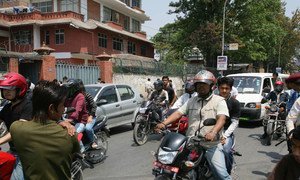 With more than 3,400 people, many of them young men and women, losing their lives on the world's roads every day, United Nations Secretary-General Ban Ki-moon marked the World Day of Remembrance for Road Traffic Victims with a strong call to scale up action to prevent these deaths.