UN Photo
'Women in space breakfast', at the High-level United Nations forum, aimed at exploring the role of space in socio-economic and sustainable development.

23 November 2016
At a high-level United Nations forum under way in the United Arab Emirates aimed at exploring the role of space in socio-economic and sustainable development, a senior UN official is urging the global space community to “make Space for Women” within the next two years.

Simonetta Di Pippo, Director of the UN Office for Outer Space Affairs (UNOOSA), issued the call this week in Dubai during High-Level Forum on Space as a Driver for Socio-Economic Sustainable Development organized by her Office and the United Arab Emirates Government.

She was among five women from four countries at the Forum, which opened Sunday, who addressed participants at a networking breakfast for women who work in the international space sector.

Inspiring women and girls to become involved with the STEM subjects¬ – Science, Technology, Engineering and Mathematics – is another objective.

‘Space for Women’ has a proposed start of 2018, which will mark 50 years since the First United Nations Conference on the Exploration and Peaceful Uses of Outer Space (UNISPACE).

Sumaya Al Hajeri of the UAE Space Agency shared a quote from her Prime Minister who said the country has moved from the phase of empowering women to empowering society through women.

The United Nations Office for Outer Space Affairs Director Simonetta Di Pippo has spotlighted the presence of jobs in space technology and the merits of diversity. Speaking to UN News Centre at the Dubai Space Forum, Ms. Di Pippo noted that diversity should be an asset which counts as the real merits of each of every person.

The national space programme wants to attract more women, who account for more than 37 per cent of employees, she said.

Successful candidates will join colleagues like Khuloud Al Harmoodi, who spoke of her journey from university student to landing a job with the Mohammed Bin Rashid Space Centre, which is hosting the UN/UAE High Level Forum.

Gale Allen of the United States’ National Aeronautics and Space Administration (NASA) highlighted some of the challenges to improving the numbers of women in STEM subjects.

She said studies show that women learn differently from men. For example, when studying calculus, they prefer to understand how it can be applied as opposed to just doing calculations.

Dominique Tilmans, President of EURISY, a non-profit that connects space and society, brought news from Europe. She reported that although many women are enrolled in university, they are not pursuing the sciences.

Ms. Tilmans suggested that perhaps promoting the job opportunities the industry offers could increase women’s participation in the sector.

The High Level Forum on space as a driver for socio-economic sustainable development concludes on Thursday. It is the first in a series of three forums leading up to the June 2018 commemoration of UNISPACE+50. 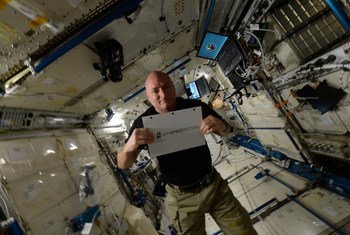