UN Photo/John Isaac
Young children at the "Killing Fields" memorial, located on the outskirts of Phnom Penh. Large numbers of teachers, academics, artisans and professional workers were killed when the country was under the rule of the Democratic Kampuchea regime between 1975 and 1979.
23 November 2016

The United Nations-backed court set up to bring to trial those most responsible for crimes committed during Cambodia’s brutal Khmer Rouge regime today upheld life sentences for two top former Khmer Rouge leaders on Wednesday for crimes against humanity.

A news release announced that the Supreme Court of the Extraordinary Chambers in the Courts of Cambodia (ECCC) upheld its judgement on appeals against the trial judgement regarding Nuon Chea, former Deputy Secretary of the Communist Party of Kampuchea, and Khieu Samphan, former Head of State of Democratic Kampuchea. The two, who are the most senior surviving members of the regime, were were sentenced in August 2014.

In a lengthy decision, the Court also reversed the convictions entered by the Trial Chamber for the crime against humanity of extermination in relation to the evacuation of Phnom Penh and the second phase of population transfers. It found that the evidence before the Trial Chamber in relation to the population movements did not establish beyond reasonable doubt the requisite killings on a large scale “committed with direct intent.”

In April 1975, during the first phase of the movement of the population, at least two million people were forcibly transferred from Phnom Penh by Khmer Rouge soldiers often at gunpoint, and in terrifying and violent circumstances. The population was forced to march to rural areas during the hottest time of the year and without adequate food, water or medical care.

The ECCC, which is currently handing four cases, was created by Cambodia and the United Nations, but is independent of them, and is a Cambodian court with international participation that will apply international standards.

In the late 1970s war and civil strife had devastating effects on Kampuchea, causing hundreds of thousands of people to flee their homes and seek food and refuge in neighboring Thailand. UN relief agencies and cooperating independent groups responded to the crisis by helping to establish refugee camps along the border and taking in food, medical supplies and other essentials. UN Photo: Saw Win 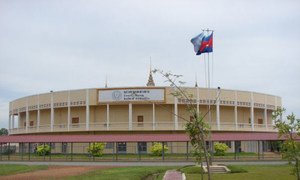 The United Nations-backed court set up to bring to trial those most responsible for crimes committed during Cambodia’s Khmer Rouge regime today announced charges against former member Ao An of “crimes against humanity of murder, extermination, persecution on political and religious grounds, imprisonment, and other inhumane acts” committed at three sites.