‘Shame on us all’ for failing to stop annihilation of eastern Aleppo, UN aid chief tells Security Council

Emphasizing that month after month he returns to the Security Council with new reports of ever-worsening human suffering in Syria, the top United Nations humanitarian official today urged the 15-member body to act now and end the protracted conflict.

“I am more or less at my wit’s end […] I had hoped to say today that last month I put it all on the table and frankly it’s still just as terrible and leave it at that – shame on us all for not acting to stop the annihilation of eastern Aleppo and its people and much of the rest of Syria too,” the UN Emergency Relief Coordinator, Stephen O’Brien, said in a Council briefing held at the UN Headquarters in New York.

“All the facts and reports I gave last month have not, not one of them, been changed, qualified, denied or proven wrong, by any one of you or anyone beyond this room,” he added.

Mr. O’Brien, also the Under-Secretary-General for Humanitarian Affairs, said that he has long called for a lifting of all sieges, which have become one of the most prevalent and insidious aspects of this merciless conflict.

This time last year, the number of besieged people stood at 393,700. Six months ago it stood at 486,700. Today, it is estimated that a total of 974,080 people – nearly one million Syrians – are living under siege. New locations included Joubar in Damascus, and Hajar Al Aswad, Khan al-Shih, and multiple areas in the enclave of eastern Ghutah in Rural Damascus, he said.

Since cross-border humanitarian operations began over two years ago, the UN has conducted 420 convoys, or nearly four a week on average, delivering health aid sufficient for nine million people, including vaccinations for two million people, and food for three million people, many on a monthly basis, among other assistance.

“Unfortunately, I must report to this Council that since the last reporting period none, not one, of our inter-agency convoys were able to deliver aid cross lines,” he said.

In October, the Security Council failed to adopt two draft resolutions to end the bloodshed in Syria’s besieged eastern Aleppo.

“I hear the argument that this Council should not pass a resolution because it would be ‘premature,’” he said. “It is never, never too premature to save a life. It is never too soon for you to find a solution to this conflict and end the suffering of the Syrian people.”

Also addressing the Council was the World Health Organization’s (WHO) representative in Syria.

“Before the conflict began, Syria had one of the most advanced health care systems in the Middle East,” said Elizabeth Hoff, who has been in that position for more than four years.

She said that as the country had reached middle income status, noncommunicable diseases were becoming the predominant health concern, and national vaccination coverage rates were 95 per cent. Syria's thriving pharmaceutical industry produced over 90 per cent of the country’s medicines and exported its products to 53 countries.

“Now, almost six years later, the picture is starkly different,” she said, noting that health care services have been devastated, with over half the country’s public hospitals and primary health care centres either closed or only partially functioning.

Almost two thirds of all health professionals have left the country, and domestic production of medicines has dropped by two thirds and vaccination coverage rates have dropped by half, she said.

“Denying ordinary citizens access to health care is an affront to our common humanity,” she warned.

“As the global health agency, we take seriously our responsibility to speak out against these abuses whenever we can […] Nonetheless, our repeated calls for protecting health care, facilities and personnel, always fall on deaf ears,” she deplored, appealing to all members of the Council to use every last ounce of their influence to bring an immediate end to the suffering in Syria.

“It is fair to say that Minister Mouallem denied that any bombing of eastern Aleppo hospitals had taken place,” Mr. de Mistura said, noting that the denial contravenes the reports of bombings from WHO and other sources on the ground.

As for one of the main elements of the UN proposal for Aleppo, which called for autonomy by leaving the local and existing independent administration intact, the Syrian Government, through Minister Mouallem, “categorically rejected the idea of maintaining the current local administration.”

The envoy said, however, that they discussed that there could be a creative formula to resolve this disagreement.

Mr. de Mistura said they agreed on the need to fight terrorism. 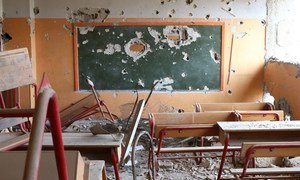 United Nations Secretary-General Ban Ki-moon as well as senior humanitarian officials have condemned attacks that have killed and maimed scores of civilians in Syria, including children, and called on all parties to cease such attacks as well as to ensure unhindered humanitarian access to the people in need.