ILO (file)
Migrant workers onboard a Thai fishing vessel. While they make an enormous development contribution to both their countries of origin and destination, many migrant workers – particularly those with irregular status – suffer human and labour rights violations.
21 November 2016

Condemning illegal fishing and labour exploitation in the world’s oceans, the United Nations agriculture and labour agencies, joining forces with the Vatican, underlined today the need for collective, global action to end labour and human rights abuse along the entire fisheries value chain.

“We have to guarantee that the seafood reaching our plates has been produced not only in an environmentally sustainable manner, but also in a manner that supports the socio-economic well-being of those who harvest and process it,” the Director-General of the UN Food and Agriculture Organization (FAO), José Graziano da Silva, told a gathering today.

Cardinal Pietro Parolin, the Vatican Secretary of State delivered a message of the Holy See, condemning “the tragic reality that within the fishing industry there are hundreds of thousands of internal and transnational migrants who are trafficked for forced labour.”

Similarly, Gianni Rosas, the Director of the International Labour Organization (ILO) Office for Italy and San Marino, equated the situation of abused fisheries workers to “modern-day slavery,” suffering horrific conditions on board vessels for months, even years at a time.

Worse still, at times they are “doped up” on amphetamines – extremely potent central nervous system stimulants – to “keep up” with the workload. They also lack the most basic of labour protection – deceptive recruitment, hardly any written contracts and few trade unions. Where regulations do exist, enforcement is poor. Tackling these conditions is even more challenging given the vastness of oceans where these ships operated, constantly moving from one country to another or operating in high seas areas not under any national jurisdiction.

It is therefore no surprise that such illegal, underreported and under reported (IUU) fishing not only creates conditions ripe for a variety of abuses, it also robs an estimated 11-26 million tonnes of fish from the oceans each year, undermining national and regional efforts to conserve and manage fish stocks.

Participants at an event co-organized by FAO and the Vatican to mark World Fisheries Day. Photo: FAO/Giulio Napolitano

However, thanks to growing consumer awareness, media attention and development of international legal instruments, such as the 2014 Protocol to the International Labour Organization Convention on Forced Labour and its Convention 188 on Work in Fishing, there are indications that things might change for the better.

It is also particularly promising that the Convention 188 – designed to ensure that workers in the sector benefit from labour protection such as safety and health care, written work agreements, and social security – will enter into force in November next year as it has been ratified by sufficient countries.

Another useful tool, particularly to counter IUU fishing is the FAO Port State Measures Agreement (PSMA) – the first-ever binding international treaty targeting the practice – that aims to increase port inspections of fishing vessels and allow for better controls to ensure that the crews are not being abused.

These two instruments, together combined with increased international awareness on labour and social issues, have provided ILO and FAO as well as industry partners, labour and fisher-folk communities and consumers associations with a new momentum to end instances of labour abuses in the entire value-chain.

“Only by working together, and coordinating our efforts, will we be able to break the chain of exploitation that affects the fishing industry in many countries,” underscored Cardinal Parolin. 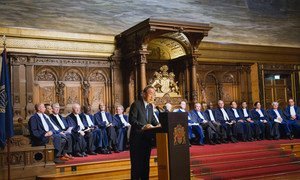 Recalling the renewed focus on seas and oceans, including as illustrated in the 2030 Agenda for Sustainable Development, United Nations Secretary-General Ban Ki-moon said today that as the global law of the sea continues to grow in relevance, so does its international tribunal.