In Paris, Ban hails support of France during his tenure as UN chief

In a meeting with the Minister for Foreign Affairs of France, United Nations Secretary-General Ban Ki-moon hailed the leadership of the country in the adoption of the historic Paris Agreement on climate change, last December, as well as for its role in the adoption of the 2030 Agenda for Sustainable Development.

Speaking to the press following the meeting in Paris, Mr. Ban also thanked France for its support for the UN in combatting violent extremism and expressed his condolences to the victims and their families of such violence.

He also noted France’s support to the UN in its work in the Central African Republic, Mali and the Middle East, particularly Syria.

He further noted that while France draws down its military operation – Operation Sangaris – in the Central African Republic, it was welcoming that France’s continued to take interest in the situation in the African country and called for an open and genuine dialogue to resolve the tensions there.

Mr. Ban also welcomed the commitment of France to the situation in the Middle East and in particular to hold an international conference on the issue.

The UN chief further emphasized that the international community’s support in Lebanon is equally important, particularly given the upcoming parliamentary elections.

Concluding his remarks, Mr. Ban expressed confidence that the Government and people of France would continue to support his successor, António Guterres, who assumes office at the start of next year, and the UN in its mission in building a better world for all.

Yesterday, Secretary-General Ban was presented the insignia of the Grand Officier de la Légion d'honneur (the Grand Officer of the Legion of Honour) by the President François Hollande of France.

Receiving the honour, Mr. Ban said that it was the UN that was being honoured and expressed his gratitude on behalf of the Organization.

Created by Napoleon Bonaparte in 1802, the Légion d'honneur (Legion of Honour) is the highest French award. For two centuries, it has been presented, in the name of the French Head of State, to acknowledge the contribution of an individual in all fields. 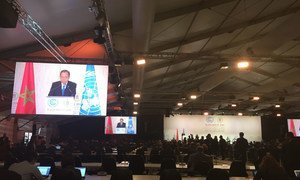 MARRAKECH: ‘We need everyone,’ Ban says, urging society-wide engagement in implementation of Paris climate accord