MARRAKECH: Countries at UN conference pledge to press ahead with implementation of Paris Agreement

As they wrapped up their work today in Marrakech, Morocco, countries gathered at the United Nations Climate Change Conference (COP 22), pledged on Friday to move forward on the implementation of the Paris Agreement, which entered into force two weeks ago.

As they wrapped up their work today in Marrakech, Morocco, countries gathered at the United Nations Climate Change Conference (COP 22), pledged on Friday to move forward on the implementation of the Paris Agreement, which entered into force two weeks ago.

In the Marrakech Action Proclamation, for our climate and sustainable development,” State Parties to the UN Framework Convention on Climate Change (UNFCCC), affirmed their “commitment” to the “full implementation” of the Paris Agreement.

They welcomed the “extraordinary momentum on climate change worldwide.” As of Friday 18 November, 111 countries have ratified the Agreement.

Last December at the previous Conference, known as COP 21, 196 Parties to the UNFCCC adopted the Paris Agreement, so-named after the French capital where it was approved. It aims to strengthen the global response to the threat of climate change by keeping the global temperature rise this century well below 2 degrees Celsius above pre-industrial levels and to pursue efforts to limit it to 1.5 degrees Celsius.

The Agreement entered into force on 4 November 2016, in time for COP 22, which has been under way since 7 November.

“This momentum is irreversible – it is being driven not only by governments, but by science, business and global action of all types at all levels,” adds the Proclamation. “Our task now is to rapidly build on that momentum, together, moving forward purposefully to reduce greenhouse gas emissions and to foster adaptation efforts, thereby benefiting and supporting the 2030 Agenda for Sustainable Development and its Sustainable Development Goals (SDGs).”

Negotiations between State-Parties concluded on Friday night. Governments set a rapid deadline of 2018 to complete the rule book for operationalizing the Paris Agreement to ensure confidence, cooperation and its success over the years and decades to come.

Welcoming the outcome of the Conference, UN Secretary-General Ban Ki-moon noted that all countries understand that climate action is essential for their security, economic prosperity and the health and well-being of their citizens. Global cooperation rooted in strong national action is essential, he noted, saying that no country, irrespective of its size or strength, is immune from the impacts of climate change, and no country can afford to tackle the climate challenge alone.

In a statement issued by his spokesperson in New York, Mr. Ban applauded the bold leadership shown by many of the world's most vulnerable countries, many of whom are in Africa, to strengthen their ambition and to move as quickly as possible toward a one-hundred-percent clean energy, climate-resilient future.

“As the global thermostat continues to rise, the Secretary-General renewed his call for all countries and all sectors of society to significantly increase their ambition and redouble their efforts to reduce greenhouse gas emissions,” said the statement, adding that the UN chief also called on developed countries to deliver on their pledge to mobilize $100 billion per year by 2020 in support of climate action by developing countries.

The Marrakech Proclamation calls for “the highest political commitment to combat climate change” and calls for “strong solidarity with those countries most vulnerable to the impacts of climate change,” underscoring the need to support efforts aimed to enhance their adaptive capacity, strengthen resilience and reduce vulnerability.

State-Parties also call “for urgently raising ambition and strengthening cooperation amongst ourselves to close the gap between current emissions trajectories and the pathway needed to meet the long-term temperature goals of the Paris Agreement” and “for an increase in the volume, flow and access to finance for climate projects, alongside improved capacity and technology, including from developed to developing countries.”

In the Marrakech Proclamation, developed country reaffirmed their $100 billion mobilization goal per year by 2020 to support climate action by developing countries. All countries also called on all non-state actors to join them “for immediate and ambitious action and mobilization, building on their important achievements.”

Alongside the negotiations, the two-week Marrakech Conference focused on various actions and initiatives taken by Governments and non-state actors to address climate change. On Thursday, the Conference launched the Marrakech Partnership for Global Climate Action Agenda to further scale up cooperative efforts in which businesses, sub-national and local governments and civil society team up with national governments to promote low-emission and resilient development.

“We need everyone,' the UN Secretary-General Ban Ki-moon said on Thursday, urging society-wide engagement in implementation of Paris climate accord. 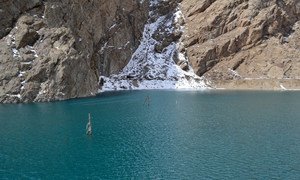