UNICEF/Roger Lemoyne
Following the passage of Hurricane Matthew in October 2016, there are still children at risk in Haiti, and 600,000 are still in need of aid.
18 November 2016

In light of upcoming elections in Haiti – which recently suffered the devastation wrought by Hurricane Matthew – the United Nations Children’s Fund (UNICEF) today expressed hope that the rights and needs of children would be a priority for those elected.

“There [are] still children at risk in Haiti, and 600,000 [are] still in need of aid,” Christophe Boulierac, a spokesperson for UNICEF, told the media at a regular news briefing at the UN Office at Geneva (UNOG).

“[We and our] partners [are] working hard in the affected areas as well as in the rest of the country, for the children and their mothers,” he added, referring to the island nation’s efforts to recover from Hurricane Matthew, which made landfall on 4 October.

Mr. Boulierac, who recently returned from a mission to the island, said that the situation in Haiti could improve as long as it received continuous support, not just support during emergencies.

He highlighted the fact that between 2006 and 2012, despite suffering a devastating earthquake, the country’s school enrolment and nutrition figures had seen significant rise while infant and under-five mortality rates had decreased.

Response to the Hurricane Matthew aftermath

On the activities of UNICEF in response to the humanitarian needs after the hurricane, Mr. Boulierac said that so far, the agency and its partners have committed to repair 103 of the 716 schools damaged by the storm. UNICEF and other UN agencies are also supporting health and nutrition programmes and providing safe water through the installation of water treatment plants.

In Jérémie, Haiti, a girl opens a hygiene kit distributed in a cholera-affected area. Hurricane Matthew passed over Haiti on Tuesday 4 October 2016, with heavy rains and winds. Photo: UNICEF/Roger LeMoyne

He added that in response to the water and sanitation challenges, exasperated by “significant flooding” in several towns, UNICEF had quadrupled the number of rapid response teams and was working with the Government and local partners to rebuild cholera treatment centres.

“So far, [we have] rebuilt 13 of the 18 cholera treatment centres that had been completely destroyed, and would make sure that they would be integrated back into the health care centres, which needed to be rebuilt,” the UNICEF official said.

Mr. Boulierac further reported that on 10 November, the Ministry of Health, supported by UNICEF and the UN World Health Organization (WHO), had launched a large-scale cholera vaccination campaign, targeting more than 800,000 individuals. He underscored that on top of vaccinations, water and sanitation, and the right practices, especially washing hands are extremely important to prevent occurrence and spread of cholera.

He further said that water sanitation intervention teams have also been deployed when a suspected case of cholera is reported to help create a “cordon sanitaire”, understand the cause for contamination and undertake disinfecting, as well as spread awareness, and distribute ‘aquatabs’ (water purification tablets) and other items for water treatment at home.

He also briefed the media on protection and assistance programmes for vulnerable families to reduce family separation as well as to ensure that families are reunited and that the children’s rights are protected. 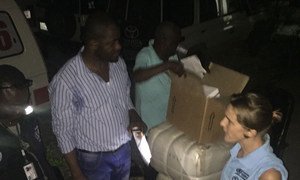 A vaccination campaign against cholera began today in the areas of Haiti hit hard by Hurricane Matthew, with support from the United Nations and other institutions